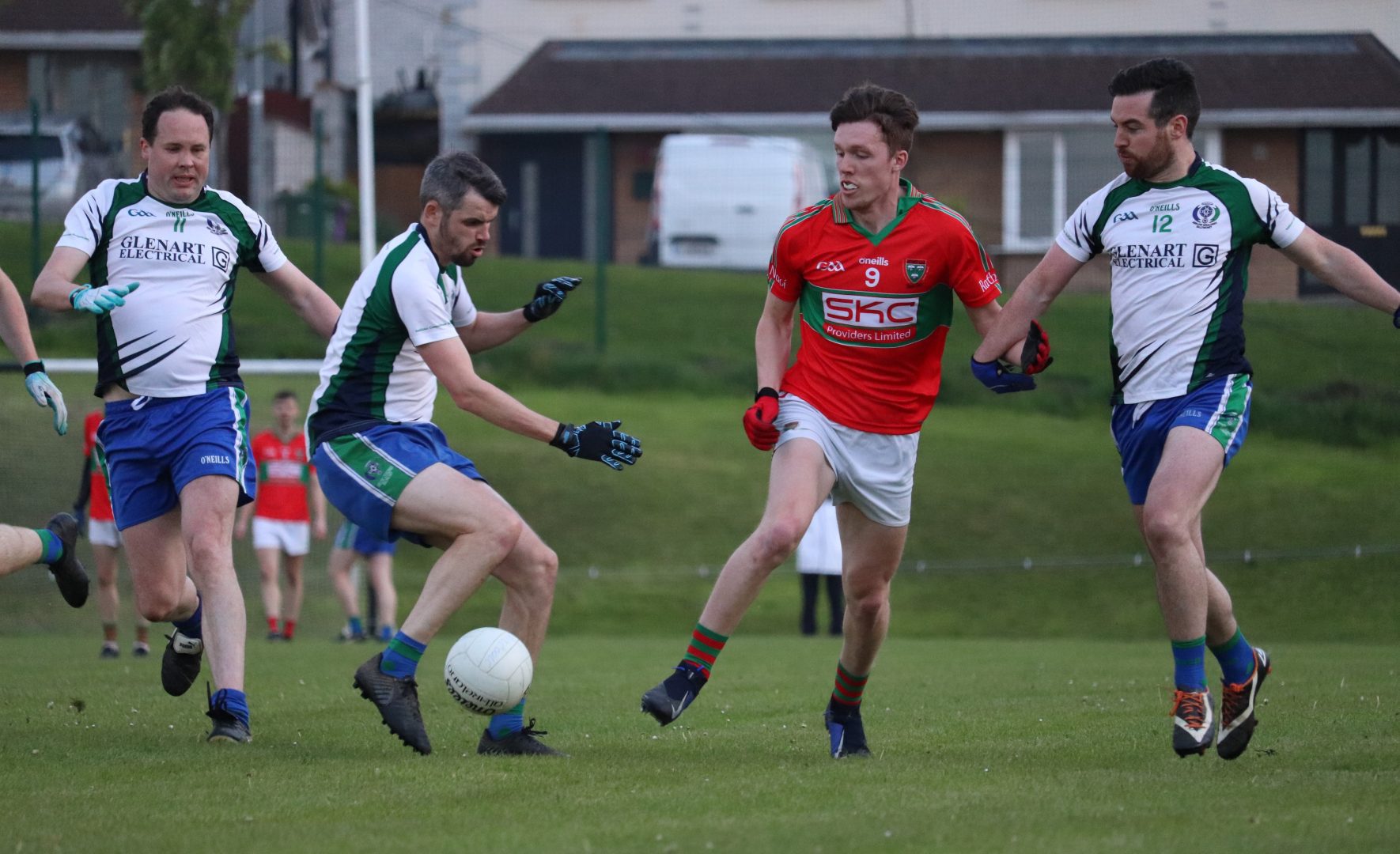 Arklow Geraldines-Ballymoney have put the pressure on Baltinglass at the top of division one, following a dramatic one-point win over 14-man Rathnew on Friday night.

In a back-and-forth affair, AGB managed to overcome a brave Rathnew side that lost Nicky Mernagh to a controversial red-card in the second-half, to reduce the gap at the top to just a single point.

Going into the game on Friday, both sides were in a position to close the gap on a Baltinglass outfit that will not play until Sunday, against Tinahely.

The early exchanges of the tie were tense, as neither panel wanted to make any mistake that would allow the other in.

The first score did not come until four-and-a-half minutes into the first-half, when Mark Doyle spun on the ball, off a dropped in free, and split the posts to give the hosts the lead.

That lead would last three minutes, when James Stafford was dispossessed in midfield by the dogged AGB. From there, Philip Gleeson worked the ball onto Dáire McBride, who fed Darragh Culleton to level matters.

The two teams traded points, before AGB took charge of the game mid-way through the first-half, starting with a score that stemmed from a typically well-worked kick-out.

Mervyn Travers, as he had done all game, played the ball out to Andrew Maher at right half-back. Maher then worked the ball down the right-hand side, where Cormac O’Shea had a shot well-blocked by Paul Merrigan.

The influential Chris O’Brien picked possession up at the break-down, and put the ball over the bar. A Culleton free extended their lead to two, as Rathnew struggled to cope with the frequent recycling of the ball by the AGB midfield and half-forward line.

With ten minutes left in the half, Rathnew demonstrated the heart and perseverance that would keep them in touch with Arklow over the course of the game. First, James Stafford closed the gap to the minimum with a well-taken score, before Eddie Doyle took advantage of AGB miscommunication to win, and score, a free.

Arklow would go into the break with a deserved half-time advantage, however, through another Culleton free.

The half-time interval gave Rathnew the chance to recharge their batteries, as they came back out with a renewed sense of vigour. Unfortunately for the Village, AGB’s quality, and a pivotal refereeing decision, meant that that would not be enough.

With the forwards increasing the pressure on the AGB kick-outs, Eddie Doyle drew the sides level with less than a minute gone in the second-half. Stephen Hurley put the visitors in front, before a dramatic call in the 41st-minute, made by referee Darragh Byrne, turned the game on its head.

With the elusive Darragh Fitzgerald charging down AGB’s left-hand side, Nicky Mernagh committed to a rash, ill-timed lunge on the forward. Mernagh was given his marching orders by Darragh Byrne, leaving Rathnew with 14-men for the remainder of the contest.

Arklow took advantage of their numerical advantage, and pushed further in front of the home team. A free was cleverly worked short onto Hurley, who put the ball over, before Andrew Maher extended the lead to three with less than 15 minutes to go.

Rathnew managed to work their way back into proceedings, with Ross O’Brien, Theo Smith, James Stafford, and Eddie Doyle driving their troops up the field in search of chances to bring the game level.

After AGB squandered a chance to score the first goal of the day with 12 minutes left, Smith went up the other end to close the gap the two. Shortly after, it was back to the minumum through Eddie Doyle. Chris O’Brien put Arklow back in front by two, before Rathnew completed their remarkable comeback through Eddie, and Mark Doyle, to make the score 0-10 apiece.

As the game entered additional time, both sides went gunning for a winner. It was at this point that AGB’s quality shone through.

Having seen Darragh Fitzgerald have a strike well-saved by Peter Dignam minutes prior, Chris O’Brien collected possession, and strutted inside off the flank, before stroking ball over the bar for the final score of the night