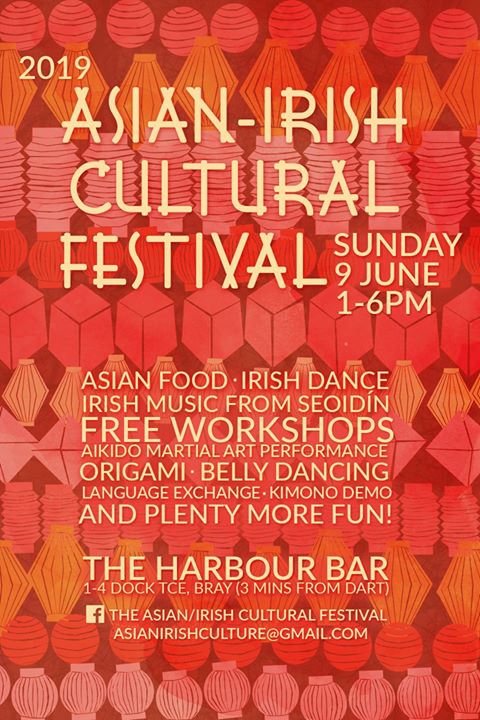 The Asian/Irish Cultural Festival celebrates the diversity, multiculturalism and integration between Irish, Asian and all communities in Wicklow, Dublin and further afield. As the festival gears up to celebrate its fifth anniversary, it promises to be bigger and better than ever!

This year proceedings take place on Sunday, the 9th of June from 1-6pm in the Harbour Bar, (Bray, Co. Wicklow) where old friends as well as new, will be joining in the fun! With a day of free family oriented events, this year attendees can look forward to a demonstration of one of the oldest forms of Japanese sword martial arts called Katori Shinto Ryu from Brian Byrne, Sufi Music from the Indian Classical Music Society of Ireland, traditional Irish dancing from Scoil Rince Fainne and the Dowling School of Irish Dancing. Traditional Chinese, Japanese and Indonesian dancing will also be in the mix, along with belly dancers, The Zoryanna and a taste of Bollywood, courtesy of Bollywood Fusion Ireland!

Other attractions include: free Origami and Japanese writing workshops, as well as a Henna art demonstration, music from Vietnam and a tin whistle performance with an Asian twist!

For the fashion minded there’ll be Sari and Kimono fashion shows. Foodies can enjoy the cuisine of: Indonesia, India, Pakistan, Japan, China and Ireland of course! With tea being an Irish institution, festival goers will be given an insight into how the worlds biggest producer of tea, China, drinks theirs with a demonstration of tea preparation and customs!

The theme of integration and multiculturalism is at the heart of this celebration and as a nod to this, upstairs in the Harbour Bar will see a mixture of organisations and activities which reflect this theme as social enterprises and local artists offer the public an opportunity to immerse themselves in the very best of Irish and Asian culture.

Promoting an interest in and awareness of linguistic diversity has always been a mainstay of the festival and this year is no different, with Irish, Chinese and Japanese exchange featuring on the main stage. In recognition of our fifth anniversary we are very excited to announce that Mother Tongues, a not for profit organisation that aims to raise awareness of the benefits and challenges associated with bilingualism will be in attendance upstairs in the Harbour Bar with ‘Story Boxes’. This is a multilingual story making and storytelling project for young children where stories from around the world are told in different languages with the use of visuals to aid understanding.

Continuing the theme of inclusion, festival organisers Sue from Ireland and Rie from Japan, say the festival aims to reach out to all communities and so if you have a love of, or are are involved with, the Irish or Asian cultures and think that you could add to the event don’t hesitate to contact asianirishculture@gmail.com or the Facebook Page: Facebook/ The Asian Irish Cultural Festival Bray.

Either way, everyone is welcome on the day!