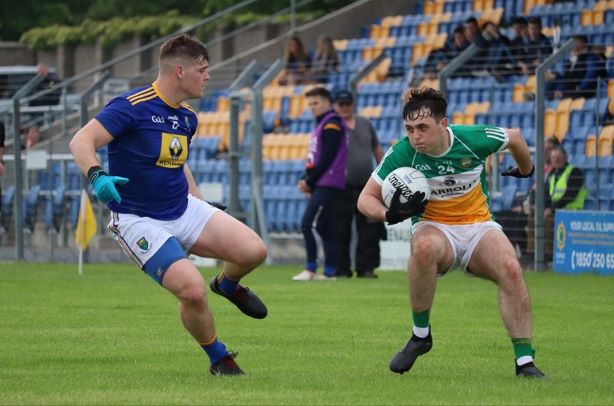 Cian Farrell was the chief tormentor as Offaly put on a clinic to leave Wicklow winless in the Liam O’Connor Cup.

The hosts came from four points to no score down after 17 minutes of the first-half, to trail by just a point at the interval; setting the stage for their first win of the competition.

However, the Edenderry clubman’s second-half penalty, followed shortly after by a goal from Shane O’Toole Greene, handed Offaly the points over a shell-shocked Wicklow side.

Going into the game following their defeat to Westmeath on the opening day, Wicklow were slow out of the blocks on a warm, cloudy day in Aughrim.

Peter Hempenstall got the home side’s first wide of the afternoon early, before Cian Farrell put the visitors in front from a free inside the fourth-minute.

Wicklow struggled to create many clear-cut chances in the opening quarter of an hour, while Offaly extended their lead to 0-04 to no score, through Jack Bryant, Cian Johnson, and Peter Byrne.

Finally, with 17 minutes on the clock, Wicklow finally got their first score of the afternoon from Cian Lee.

A minute and a half later, Lee got his second to put Wicklow within a goal of taking the lead. Points from Ronan Murray and Andy Maher, either side of a Kevin McDermott wide for Offaly, drew the two sides level, with Wicklow in the ascendancy.

However, Offaly did manage to go into half-time with the slender lead. Cathal Donoghue and Cian Farrell restored Offaly’s two-point advantage, before a Gearóid Murphy free sent the two sides into the mid-way interval, separated by the minimum at 0-06 to 0-05.

While Wicklow may not have wanted the end of the first-half to come, it was exactly what Offaly required, as the visitors recharged and put on a second-half show, with Cian Farrell at the forefront.

Farrel kick-started proceedings with a point inside the first 90 seconds of the half, before Cian Johnson put Offaly into a three-point lead.

Sam O’Dowd put Wicklow back to within two, only for Farrell to pop up with a free to cancel the point out.

The two sides would trade points for the next nine minutes, with Fintan O’Shea Keeling Wicklow within touch.

Unfortunately, O’Shea’s would be Wicklow’s last score of the afternoon, as Offaly turned the score for the final 15 minutes.

Cian Johnson and Adam Bolger extended the deficit to five, before Wicklow’s struggles were compounded by a tired challenge from Kevin Quinn inside the area.

The tackle, which earned Quinn a black-card, gave Farrell the opportunity to put the result all-but beyond doubt from the spot.

The chance was not passed up, as Farrell blasted the ball past Conor Browne in the Wicklow goal, to make the score 1-12 to 0-07.

Offaly’s second goal came shortly after from Shane O’Toole Greene, as the away side came away with the comfortable win.