History avenged as Dublin knock Wicklow out of Leinster championship 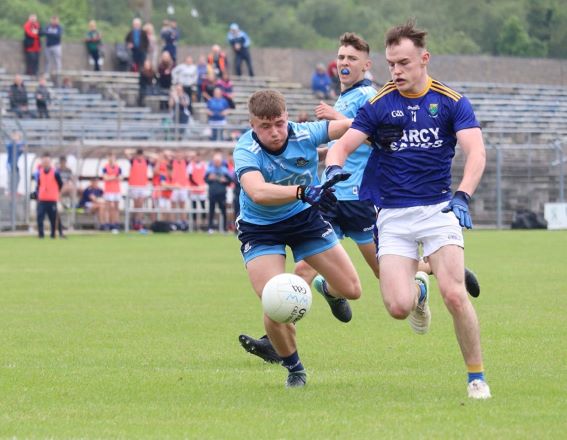 Dublin avenged their 2018 defeat to Wicklow to knock Kevin O’Brien’s men out of the Leinster minor football championship, following a dramatic and enthralling quarter-final on Saturday afternoon.

Just under a year after handing the Dubs a shocking loss in the provin\cial championship, Wicklow were made fully aware of the task that was on their hands in Aughrim; going into the half-time break nine points behind.

The Garden did manage to give the 33-times champions a fright in an astonishing second-half through a Joe Prendergast goal. However, the class of the away side, and wastefulness on the part of the hosts, proved decisive as the Dubs won out to march onto the semi-finals.

The day before the titanic match, Kevin O’Brien issued a rallying cry to supporters of his team to turn out in force as a means of motivating his men towards another historic result. The people answered, as fans of both counties filled the stands on both sides of the ground to create a big-fight atmosphere.

The extra encouragement seemed to spur Wicklow on in the opening third of the first-half. Despite falling behind to a Fionn Murray free with three minutes on the clock, the home side quickly turned the game around through Shane Daly and Matthew Ging. Joe Prendergast would then strike the upright, as Wicklow looked to turn their early showing into comfortable breathing room on the scoreboard.

That would not materialise, as Dublin grew into the half in-style. Between the 10th and 13th-minute, Dublin retook and extended their lead through Murray (two frees), Seán Kinsella, and Ryan O’Dwyer (free). A Shane Daly score off a quick-free from Matthew Ging brought them back to within one, but his would be Wicklow’s final score in a disappointing first-half for Kevin O’Brien.

With Wicklow struggling to close the gap, Dublin turned on a shot-taking clinic; getting seven points from as many shots. Fionn Murray, Alex Rogers, and Ryan O’Dwyer each got a brace each among those seven, while Robbie Bolger also scored to send Dublin into half-time with a confident lead.

The second-half started in much the same way as the first ended. Rogers (two), and Murray pushed them 12 in front. Prendergast broke Wicklow’s second-half duck to kick-off a rally that threatened to overturn a game that seemed all-but lost.

A pair of Ging frees made it 0-16 to 0-06 in favour of the Dubs, before a bit of clever interplay near the Dublin area ended with Prendergast being fed over the top, and slipping the ball under the onrushing Hugh O’Sullivan in the Dublin goal.

Suddenly, what was a ten-point gap was now seven, with 12 minutes left. Dublin were suddenly being made to work in a way that they had not since the first ten minutes. With Shane Daly, Matthew Ging, and Cillian McDonald ascertaining more of a hold on proceedings, Wicklow started to move through the gears.

On 54 minutes, a familiar long-ball into the corner was aimed at Ging, only for him to hit the deck under an off-the-ball tackle under Senan Forker. The referee, with assistance from his linesmen, awarded the penalty, only for Ging to see his shot saved brilliantly by O’Sullivan. The goalie could not rest, as the ball was soon worked back to Ging. His next effort got past the keeper, but was blocked off the line spectacularly by the tremendous Conor Tyrrell.

Three minutes later, Wicklow were presented with yet another goal chance, as Daly galloped across the onrushing O’Sullivan, only to blast the ball over the bar with the goal at his mercy.

Not to be outdone, Dublin went up the other end and squandered their own pair of chances, in a fashion that was somehow even more baffling. In the space of less than 15 seconds, Luke Curran and Tom Brennan, both brought on as substitutes, smashed the ball off the crossbar with separate shots, as matters reached a late crescendo.

Despite Tom Keogh pulling Wicklow back to within five points in the first minute of additional time, it was Dublin that showed the class and fortitude to see the game out the better, as Curran made up for his missed goal chance with a pair of points, as Dublin won out to march on to the Leinster semi-finals.