‘It is about not forgetting the important things in life, it can be changed in an instant’ 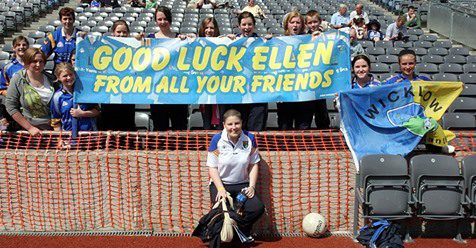 Twelve years ago, the small community of Tinahely was rocked by the tragic passing of Ellen Kinch. A daughter to two loving parents, and middle sibling to two devoted sisters; the then-16-year-old has left behind an enduring legacy throughout the town, and the county of Wicklow as a whole.

To pay tribute to her, as both a person and a gifted young footballer, her family have organised the Ellen Kinch Memorial Cup every year since 2008.

“When there is something like this on, everyone gets behind whoever is organising it. It’s brilliant in that sense,” Ellen’s sister, Jackie says.

“I know that my parents and my sister are there on the organisational side of things, but you’re still thinking that everything has to go according to plan.”

Jackie was just 14-years-old when Ellen passed away, and 12-years-old when she received her first cancer diagnosis. Reflecting on that time, Jackie says that it was the strength that Ellen demonstrated that helped her family through the experience.

“She was the bubbliest person you could ever come across. She could have been going through treatment, in the worst-case scenario, and she would still be smiling and cracking a joke.

“My parents were two rocks through it. I know that they would have had their breakdowns and stuff, but for us as kids, they were two absolute rocks. Then Ellen was there, helping them through that as well. Everyone kind of bounced off eachother. Her being so enthusiastic, with a positive outlook on it, definitely helped in that sense.

“She was a different breed.”

Among many other things, a passionate love of football was shared by Jackie and her older sister. Both started their playing careers with the boys, before moving on to Carnew, and finally back to Tinahely once their ladies team was established.

“She was a deadly wing-back, she would take these little steps,” Jackie chuckles.

“She only ever got to play once for Tinahely when she was sick. The club organised a day for Ellen, an appreciation day, and she togged out. She was receiving treatment at that stage, but she togged out and played for 10-12 minutes, which showed the kind of character that she had.

“She would have always been an inspiration for me.

“We only got to play together once, because there was a two-year gap in which we never overlapped at underage. I was under-14s, we were both playing with Carnew at the time, and they were playing a game in Annacurra.

“They were short for numbers, and I remember that Paddy Cummiskey was over them. He was begging my mother to let me play in goals for them, so that was the only time that we got to play together.

Since starting the Ellen Kinch Memorial Cup in 2008, Jackie, her family, and all of the other organisers have run a total of 11 iterations of the charitable event; starting with 15-a-side matches before changing to seven-a-side blitzes from 2014, the donations from which have been donated to Barretstown Children’s Charity.

“I always had it in my head that, down the road, we would do a blitz. I just thought that it would be best to get everyone together. When we were under-12s, we used to always go to these blitzes, and they would be the best things ever. As you grow up, blitzes kind of go away, so I thought that we should bring them back into adult football.

“You play football to enjoy it. The idea of the blitz is so that everyone can have a great day, and go back to why we started playing football; yeah, we play to win, but we all play it because we love the game.

“This is my way of giving back. Because she was sick and we had seen her in Crumlin and the hospital, it was great to see her out-and-about. As a family, it would have brought us closer together.

“Barretstown has this sense, when you are there, that is magic. As a kid, when you are watching cartoons, everything is magical. Barretstown is a bit like that. It is hard to describe the feelings that we got coming out of Barretstown.

“The experience was exceptional for the whole family, and all the volunteers were exceptional as well.”

On Sunday, the 9th of June, St. Kevin’s will host the 12th Ellen Kinch Memorial Cup. Thirteen teams from 11 clubs around the county will take part, while teams from Carlow and Tyrrellstown will make up the 16-team celebration.

For Jackie, the blitz aims to represent the most important lesson that she and her family learned from Ellen’s story.

“The fact that you can have these family-orientated days is bringing us back to our roots.

“It is vital not to forget the important things in life. Anything can happen. Your life can be changed in the morning. It is a matter of enjoying the now.”

The Ellen Kinch Memorial Cup takes place in St. Kevin’s GAA Club, on Sunday, the 9th of June. Donations can be made at: https://give.everydayhero.com/ie/ellen-kinch-memorial-cup-2019.