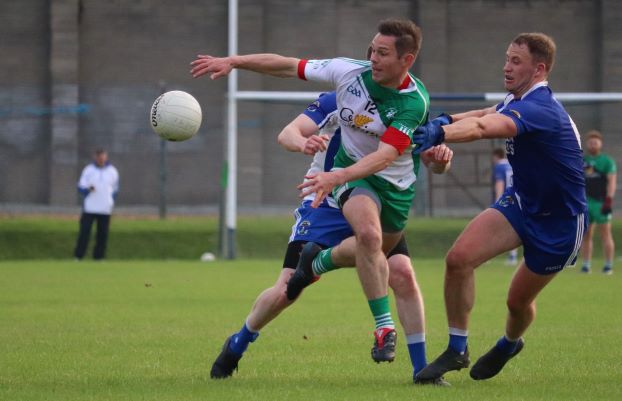 St. Pat’s came from behind to defeat Baltinglass and retain the Dunne Cup following a closely fought, back-and-forth final in Aughrim, on Tuesday night.

The game turned on a red card dished out to a Baltinglass men, as St. Pat’s took advantage of their numerical edge to turn the game around. Tommy Kelly received his marching orders at the death, but the damage had been done.

Tuesday’s clash between the newly-crowned Division 1 league champions and the reigning Dunne Cup winners fit the prototypical mold of a game of two halves. While Pat’s took an early three-point lead at the start of the first-half, it was Baltinglass who enjoyed the better fortune in the opening period.

Another Conor O’Brien point reduced the gap to a minimum, but Pat’s were struggling to fashion clear opportunities, while Tommy Kelly, who scored seven goals and 56 points in the league, was being marked out of the game by the dogged Paddy Kirwan; both of whom were yellow carded by referee Noel Kinsella as a result of one too many tussles.

The two sides exchanged scores going into the final ten minutes, before Johnny Keogh and another Mark Jackson free put Baltinglass three points ahead. Stephen Duffy slotted a free after Patrick McWalter had been brought to ground to put Pat’s within a score of taking the lead as the referee blew the half-time whistle.

A half-time change in personnel and tactical focus, an inspired performance from Padge McWalter, and a controversial red card would flip proceedings upside-down, as Pat’s turned the deficit around to lift the Dunne Cup.

Aidan Dunne and Matthew Traynor were introduced by manager Casey O’Brien at the break, as Jonathan Delahunt and Jack Dunne made way.

The second-half started in much the same way as the first, as the energetic and incisive Conor O’Brien set up Tommy Kelly for just his second score of the day. Dean Healy had a shot at goal saved before Paddy Kirwan robbed possession from Tommy Kelly once again, as Pat’s upped the tempo.

Conor O’Brien fisted the ball over the bar to bring the sides level, before claiming a high-ball out of the air to set-up Stephen Duffy, who put his resulting shot high and wide.

As the game approached its 40th-minute, frustration started to set in for the restricted Baltinglass team. John McGrath was shown a yellow card for taking out Donal Fitzgerald off of a mark. From the resulting free, Duffy hit the post, only for Fitzgerald to work the ball to McWalter to put the Wicklow Town team into a 0-10 to 0-09 lead.

Shortly after, Mark Jackson put a kick-out over the line, presenting Pat’s with the chance to work the ball into McWalter, who put his team two points in front. Cian Lee got a pair of points to bring the two sides level, before Tommy Kelly restored his side’s lead with 15 minutes left on the clock; setting the stage for a dismissal that shook the game to its core.

Soon after Dean Healy had contributed towards John McGrath losing possession deep in Pat’s territory, the two were involved in an off-the-ball confrontation that left Healy on the deck. The play continued for several minutes, culminating in Johnny Keogh equalising for Baltinglass.

After consulting with his linesman, the referee revisited the incident and gave John McGrath a straight red card for the transgression. A few minutes later, with nine left in the game, Donal Fitzgerald gave Pat’s their lead back at the end of a move that started with McWalter once again reclaiming possession in his own full-back line. Tommy Kelly got the game’s final score, before receiving his own marching orders late on following another tussle with Paddy Kirwan.

However, Pat’s being reduced to 14-men came too late for Baltinglass, who were unable to bring the scores level, as Casey O’Brien claimed the Dunne Cup for the second consecutive year.