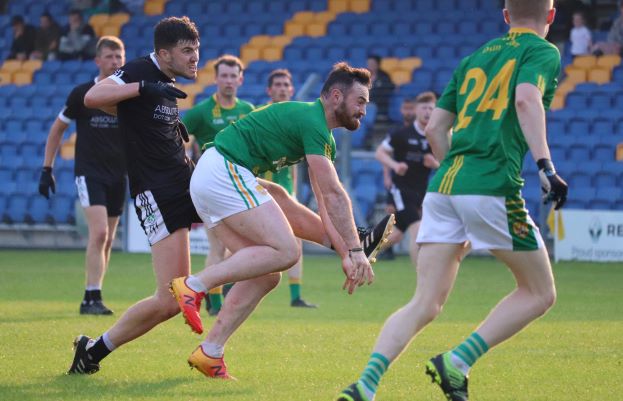 The West Wicklow Cup will return to its titular location, after Dunlavin outclassed and outfought Newtown on their way to lifting the Division 1A silverware on Monday night.

While a Paul Murtagh-inspired backline swallowed up any offensive danger that Newtown threatened, substitute Cian O’Sullivan was in clinical form at the other end to help Dunlavin on their way to a near-perfect way to cap off the league campaign.

2019 was a storybook year for Newtown. Having gained promotion from Division 2 of the senior football league the year before, they went one better and completed back-to-back promotions to move on up to Division 1; finishing the season behind only Avondale, who Dunlavin knocked out of the West Wicklow Cup at the semi-final stage.

On their way to advancing up another division, Newtown suffered five defeats, one of which coming at the hands of the team that they met in Aughrim on Monday evening.

While the scoreline was a lot less drastic than it was back in February, when Dunlavin trounced them 3-14 to seven points, the final result remained the same.

It took just a minute and a half for Dunlavin to seize the advantage, when Timothy Metcalfe robbed possession in the Newtown half-back line, before teeing up Daniel Dawson to split the posts.

The dogged turnover of the ball was a key theme in Dunlavin’s style all game, as was their ability to manipulate possession into scoreable areas. Marty Caplis and Shane O’Rourke combined before the former doubled the west Wicklow team’s lead.

Paul Murtagh, who was a constant thorn in the side of Newtown by virtue of his uncanny ability to break up the play, set up a counter-attack which ultimately resulted in Shane Carty putting the ball wide.

Newtown finally got their first-and-only score of the first-half with 15 minutes on the clock, through Denis Kelleher, but the referee’s whistle was what they needed more than anything else. Marty Caplis and Tomas Lawlor pushed Dunlavin out to a four-point lead before Eoin Murtagh got the final score of the half to send Dunlavin into the break 0-06 to 0-01 in front.

The much-needed break, as well as a couple of substitutions before the game’s recommencement, appeared to spark Newtown into life. However, whereas Dunlavin’s own half-time substitutes were in fine scoring form, Newtown were found to be wasteful when opportunities presented themselves.

Within the first four minutes of the second-half, Ross Davis — who had been smothered by the outstanding Padraig Carmody all game — had wasted three frees, while Cian O’Sullivan went up the other end to split the posts following more clever build-up play among the Dunlavin half-forwards.

Once that score had been registered, Dunlavin settled down and started to play their own game. Paul Murtagh, yet again, won possession back in the middle of the park, before setting up a counter-attack that ended with Matlis putting the ball wide of the post.

With 20 minutes left to play, Neil Martin broke Newtown’s second-half drought from a dead-ball, only for Matlis to sprint through the Newtown rearguard before teeing up substitute Darragh Dillon on the right-hand side, from where he made no mistake to restore Dunlavin’s six-point advantage.

It would only get worse for Newtown from there. Aaron Phelan, brought on for Shane O’Rourke, provided O’Sullivan with another point after bouncing off of the opposition’s star-player on the day: Shane Mooney.

Dunlavin and Newtown traded frees before Tomas Lawlor, who had scored the Dunlavin set-piece, almost compounded matters; drawing a save from a goal-bound shot after winning the ball back near the Newtown square.

That was to be but a minor setback, as Cian O’Sullivan managed to get the final two scores of the day to hand Dunlavin the final piece of silverware of the Division 1A season.