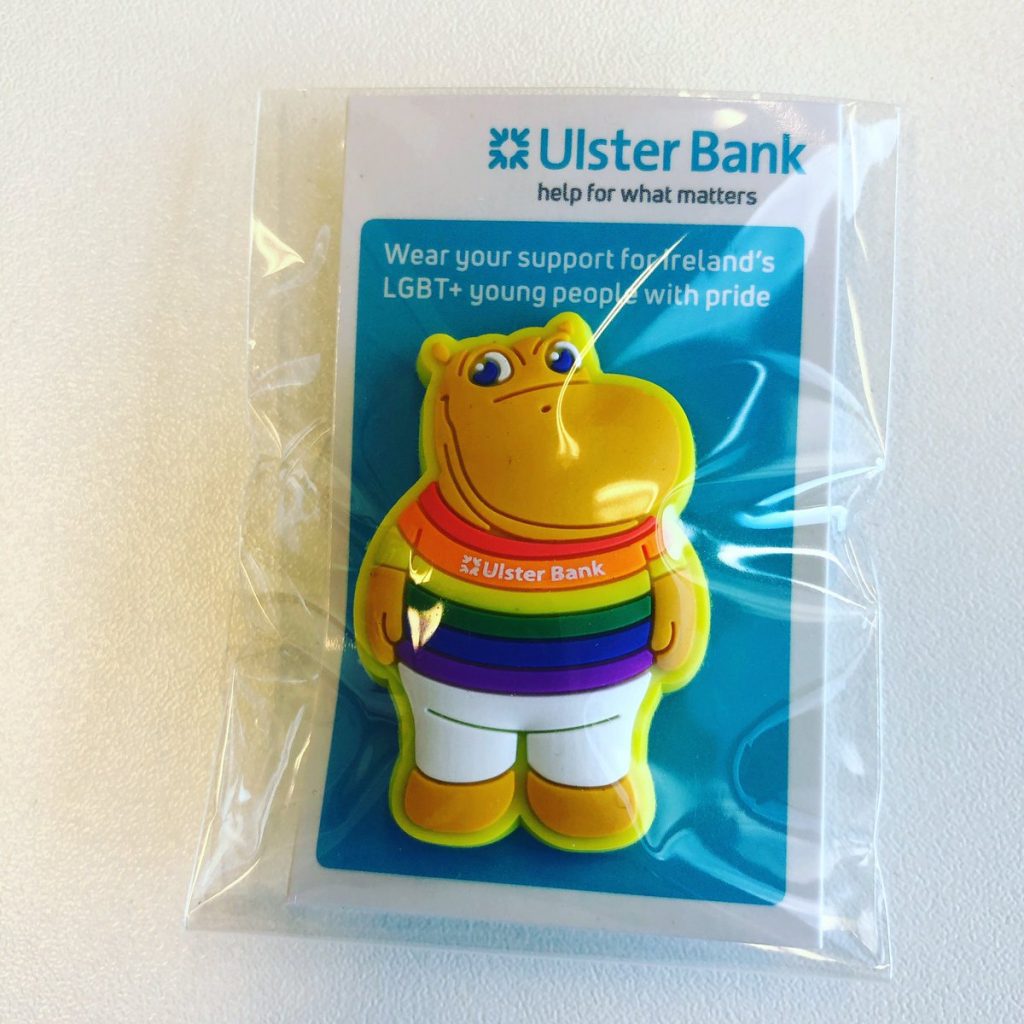 Ulster Bank is launching a nationwide fundraiser for Pride Month in support of BeLonG To Youth Services, the national organisation working with lesbian, gay, bisexual, transgender and intersex (LGBTI+) people in Ireland.

The bank has commissioned special pride-themed Henri Rainbow Pins, which will be sold in branches in Bray and Blessington, head offices as well as other locations across the country. The 3D pins, which feature the bank’s youth mascot hippo wearing a rainbow jumper, are available to buy now and cost €2.

100% of the proceeds from the sale of the pins will be donated to BeLonG To Youth Services, which supports both Arklow LGBT Support Group and Bray LGBTQ+ Youth Group in Co Wicklow.

“There are many, many reasons why LGBTI+ Pride Month exists. Every day all around the world, and here in Ireland, there are young people struggling to cope with who they are, the environment in which they live, or the situations they find themselves in. In line with our own internal culture of inclusiveness, we want to help in any way we can and that’s why we are honoured to support BeLonG To Youth Services. They do crucial work, so get involved, buy a Henri Rainbow Pin, become an ally for inclusion and help support vital services for those who may be struggling with their current reality.”

A recent report published  by the International Gay, Lesbian, Bisexual, Trans and Intersex Association ranked Ireland 17th out of 49 European countries in terms of LGBTI+ rights. While, according to the 2016 LGBTIreland Report,  LGBTI+ young people experience two times the level of self-harm, three times the level of attempted suicide, and four times the level of anxiety and depression compared to their non-LGBTI+ friends as a result of fear of isolation, fear of rejection and bullying.

“At BeLonG To Youth Services, we save lives. However, we cannot do it alone; we rely on fundraising initiatives like this Henri Rainbow Pin campaign to enable us to continue supporting the young LGBTI+ people that need us. Our mission to create a world where young people can be who they are, and love who they love, without experiencing hate and discrimination.”

Founded in 2003, BeLonG To Youth Services supports over 45 LGBTI+ youth groups around Ireland to ensure that LGBTI+ young people have access to safe spaces close to home.

The organisation has partnered with Ulster Bank on the Henri Rainbow Pin initiative, which is the main focus of the bank’s LGBTI+ Pride 2019 activities.

In addition to the nationwide fundraising campaign, staff from the bank’s employee-led internal Rainbow Network and their colleagues will also have an official presence in the Galway and the Dublin LGBTQ Pride parades.

The Henri Rainbow Pin fundraiser builds upon Ulster Bank’s proactive Pride initiatives over the past few years. For Pride 2018, Ulster Bank highlighted the story of an ex-Ulster Bank employee and her transgender son, Christopher, and the support they received from the Rainbow Network and Ulster Bank during his transition.

An updated version of this video, featuring Christopher talking about the Henri Rainbow Pin and the importance of LGBTI+ support service organisations like BeLonG To Youth Services, is available to watch here.