The latest litter survey by business group Irish Business Against Litter (IBAL) shows that Wicklow is in 13th spot overall in the ranking of 40 towns and cities nationwide and is among 14 towns to be deemed “Cleaner than European Norms”. The survey also revealed that Ireland’s principal tourist towns and cities are cleaner than ever as the peak season for visitors approaches. Kilkenny topped the rankings, with Ballymun in Dublin City a litter blackspot at the foot of the table.

The An Taisce report stated:

“A best-ever showing for Wicklow Town on its return to the League after an absence of several years. Top ranking sites included the Car Park on Church Street, the Main Street and Wicklow Harbour to Murrough Playground – the latter was exceptionally good in terms of litter.  This lovely ‘promenade’ walk is clearly a very well respected environment. Ironically, the one seriously littered site was the ‘Viewing Area’ on Dunbur Road. Most of the site was excellent with regard to presentation and maintenance but it was badly let down by heavy accumulations of food and alcohol related litter in a corner location.”

Litter levels were assessed by An Taisce, who found 31 of towns and cities, or 77%, to be clean. This was in line with recent IBAL surveys. Kilkenny topped the rankings for the 5th time, ahead of Athlone and Killarney, and the centres of our main cities Dublin, Cork, Galway and Waterford were cleaner than previously, only Limerick failing to achieve Clean status.

“Today’s tourists demand high levels of cleanliness and these results indicate that’s what they will be getting this year when they come to Ireland,” says IBAL’s Conor Horgan.

“It is also important that their first impression be a good one, so it’s pleasing to see the roads around Dublin Airport are again to Clean to European norms.”

For the first time in 3 years, an area received the lowest grade of ‘litter blackspot’ as Ballymun recorded one of the worst results since the league was founded 17 years ago.

“An indication of the progress we’ve made over past 5 years has been the absence of litter blackspots in our survey,” says Mr Horgan. However, as the Ballymun and other results show, there has been little if any progress in disadvantaged areas of our cities. The gap between these areas and the commercial high-footfall commercial city centres is widening.”

Dumping continues to feature prominently in IBAL surveys and accounts for many of the individual blackspots found in cities. Limerick City’s rating was brought down by dumping in the basements of Cecil Street and an area at Upper William Street, described as “filthy, one of the worst sites in a city centre environment.” A house on Seville Place in Dublin was used as a dumping ground, with “a mattress and all manner of rubbish” present, while a car park at Lakelands View in Mahon in Cork was “in a shocking state, clearly used as a dumping ground for domestic rubbish … soiled nappies and several dozen black sacks”. Otherwise clean, Ballybeg in Waterford suffered from dumping beside the GAA Club and at the Horticultural Project Initiative. “What was probably set out to be a place of pleasure has been destroyed,” according to An Taisce.

“We have a perception of dumping as something that takes place outside of our cities and towns, far from public view,” says Mr Horgan. “The survey shows this is not the case.” 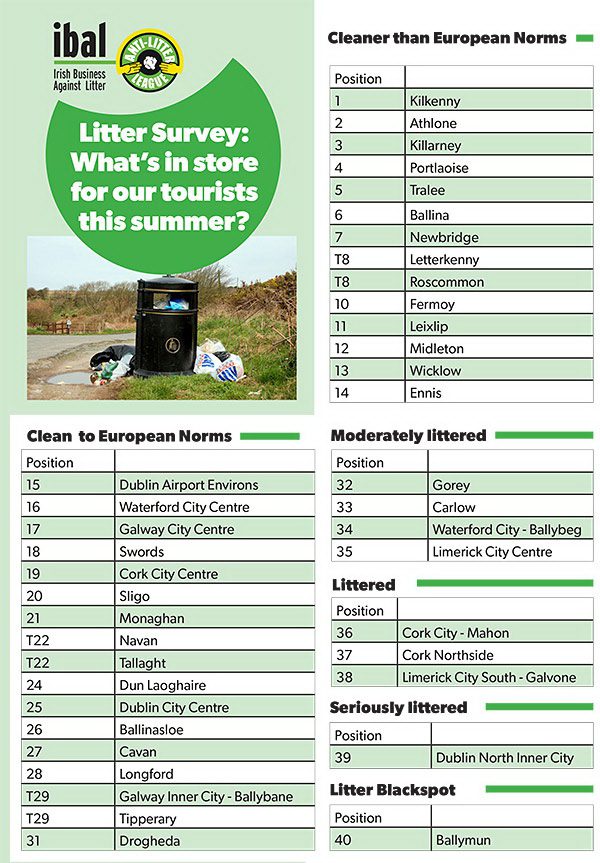 Thousands turn out to turn on Christmas lights

Light Up Your Christmas in Wicklow Town

Car Wash in aid of “I am Alex” this Saturday