This promises to be another epic afternoon of entertainment with RTE sports commentator Marty Morrissey compèring the event along with the legendary guest sports stars Niall Quinn, Alan Quinlan and Pat Spillane.

Tables are €1000 and seat ten. Included is a drinks reception, 4 course meal in the salubrious Ballsbridge Hotel followed by entertainment from the above sports stars and much more .

Full Tables can be booked through contacting Gary Prunty or Paul Cunningham on the numbers on the attached invitation or alternatively for individuals or smaller groups wishing to attend please book on the link here.

This years event is being sponsored by Home for Life and will sell out again so please don’t delay, book now to insure you won’t be disappointed.

Look forward to seeing you there . 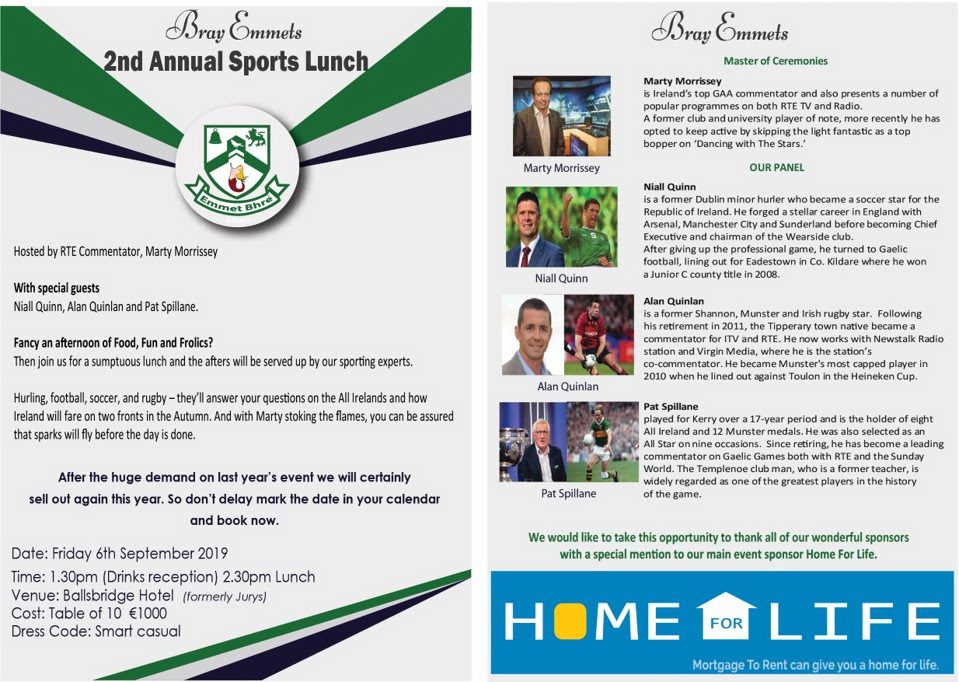 Both teams entered this game looking for a win in order to secure one of the top two spots in the group and a place in the semi finals. Carnew started the brighter of the two teams and had Bray under massive pressure from the off, leading 1-2 to 0-1 after 10 minutes of action. A couple of well taken Christy Moorehouse frees kept Bray in the game and the teams went in at half time Carnew 1-4 Bray 0-3.

Knowing what was on the line, Bray came out fighting like dogs in the second half. Christy was in un-touchable form and two goals from him had the sides level at Bray 2-4 Carnew 1-7 after 40 minutes. The strength of Bray’s bench showed in the second half with both Eoin McCormack and Ben McCormack coming on to score goals. The defensive held on strong in the end to keep Carnew at bay and the game finished with some huge goal line saves. Highlights of the game can be watched here.

Well done to the team and the management on securing a semi-final place!

Senior Mens Footballers
Our Senior Mens Football team are back in Championship action this weekend. They meet Eire Og on Saturday at 19:00 in Aughrim. The games between these teams are always tight so it should be a great game of football. Get down to Aughrim to cheer the team on in which is another must win game!

They look to bounce back from this loss as they meet Kiltegan on Thursday at 19:30 in Kiltegan. Best of luck!

Leaving Cert Results
Best of luck to all Bray Emmets players who are receiving their Leaving Cert results today. We hope your hard work and dedication is reflected in your results. However, remember that the Leaving Cert is not everything and there are many other options available.