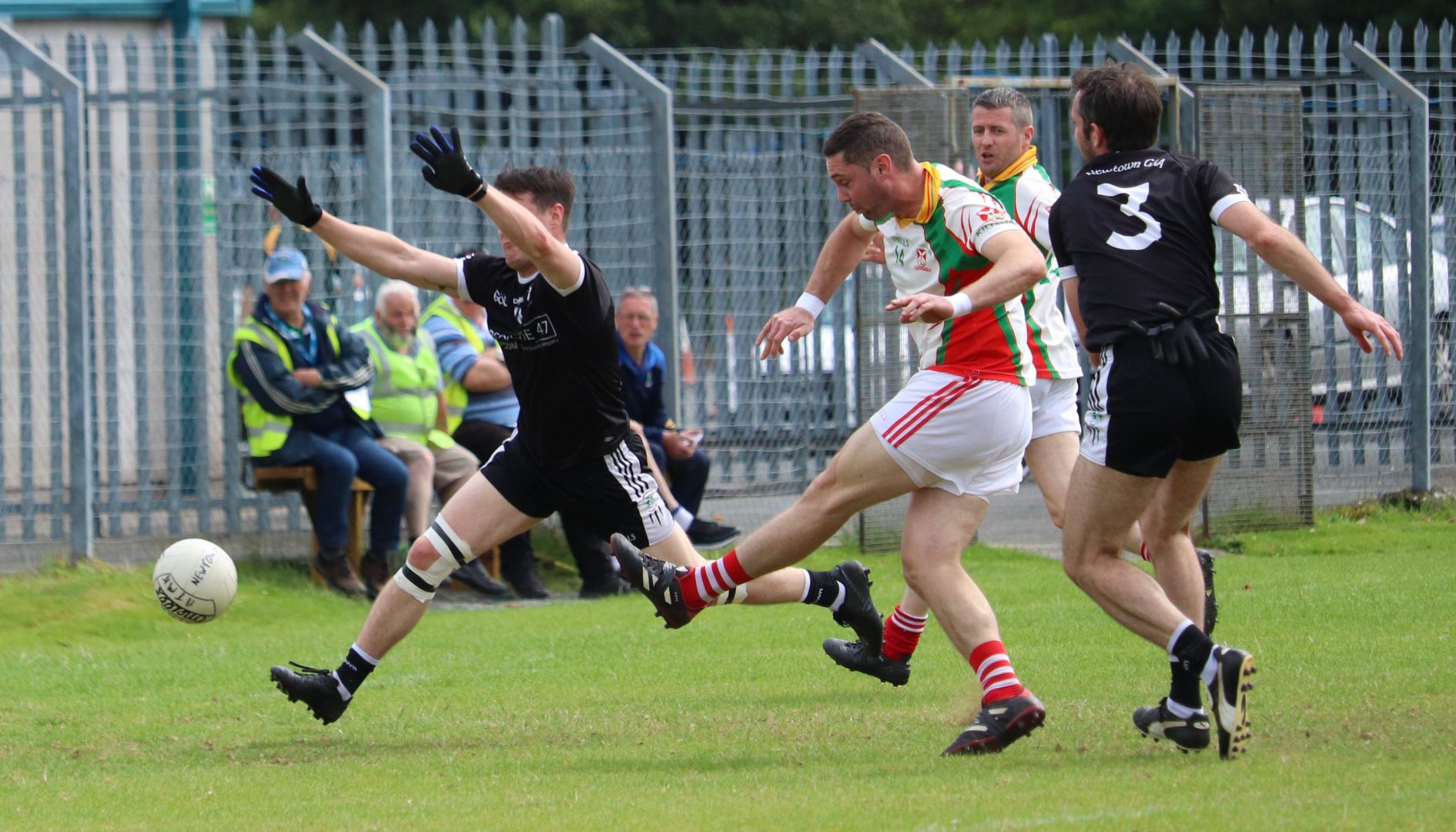 A brace of goals from the fearsome Seanie Furlong helped Kiltegan on their way to their first points of the 2019 senior football championship, at the expense of the still-winless Newtown.

Furlong followed up a first-half penalty with one of the goals of the season in the second-half, as Jeffrey Birmingham’s men got off the mark for the campaign.

It has been a difficult championship season for Newtown, thus far. Having gained promotion to Division 1 earlier in the year, they have endured a nightmare start to their senior football season. A win on Sunday was of paramount importance, and they made the perfect start; Ross Davis (3) and Declan Doyle putting them into a three-point lead inside six minutes.

That encouraging start would be the only time that Newtown would find themselves in front, as Kiltegan got into their stride to draw the game level through a Derek Daly point sandwiched between two Seanie Furlong efforts, the latter of which having been deflected over the bar by Ken Turner; denying Furlong a goal. Cathal Fitzgerald got two soon thereafter to put Kiltegan into a two-point advantage, before Furlong got his first of two goals, from the spot.

A hopeful ball over the top of the Newtown backline was collected by Daly, who darted along the by-line, before cutting inside and being brought down by Ken Turner. The goalkeeper was shown a yellow card for the tackle, and Furlong made no mistake from the spot; sending Turner the wrong way to give Kiltegan a 1-06 to 0-04 lead.

Ross Davis responded for Newtown with a high ball that dropped into the back of the Kiltegan net, but they were very much on the back foot. Furlong increased his personal tally with three further points, as Jeffrey Birmingham’s men went into the break with a commanding six-point advantage.

If the Davis goal gave Newtown a sense of hope going into the second-half, that was all but extinguished by a showcase performance from Seanie Furlong and Kiltegan.

That came despite a black card that was shown to the powerful Padraig O’Toole just over a minute into the second period. Kiltegan responded to this setback in the best way, as Furlong split the posts with a free, before smashing home one of the finest goals of the year.

Gathering the ball on the 45-metre line, Furlong played the ball inside to Rory Finn. The midfielder fed the ball back to the full-forward, who then pirouetted away from his man off his left foot, took aim, and buried the ball past the helpless Ken Turner.

At 2-12 to 1-06 ahead, Kiltegan were subsequently guilty of taking the foot off the gas, as Newtown attempted to charge back. A pair of Ross Davis frees were followed by substitute Conor Odlum taking advantage of a loose kick-out to feed Mark Fitzsimons, who popped the ball over the bar to close the gap to within five points.

As the game entered the final ten minutes, Derek Daly converted to restore Kiltegan’s advantage to six, only for Odlum, Sean Gregory, and Ross Davis to put Newtown to within a goal of salvaging a draw.

With the game approaching the last five, Kiltegan were presented with the chance to put the game to bed, coming from a typically incisive run from Rory Finn. Once again combining with Seanie Furlong, Finn came inside off the left flank, only for his strike to be saved well by Ken Turner. The ball found its way to Michael Foley, who saw his own strike cleared off the line, before Daly blasted wide.

Unfortunately for the Division 1A promotees, they were unable to take advantage of those missed opportunities, as Kiltegan got the final say through a Cathal Fitzgerald point.

Next up for Kiltegan is a tough tie against Tinahely on the 17th of August, while Newtown take on Arklow Geraldines-Ballymoney the next day.