Humans of Wicklow: The Man, The Myth, The Legend – Bill Hill 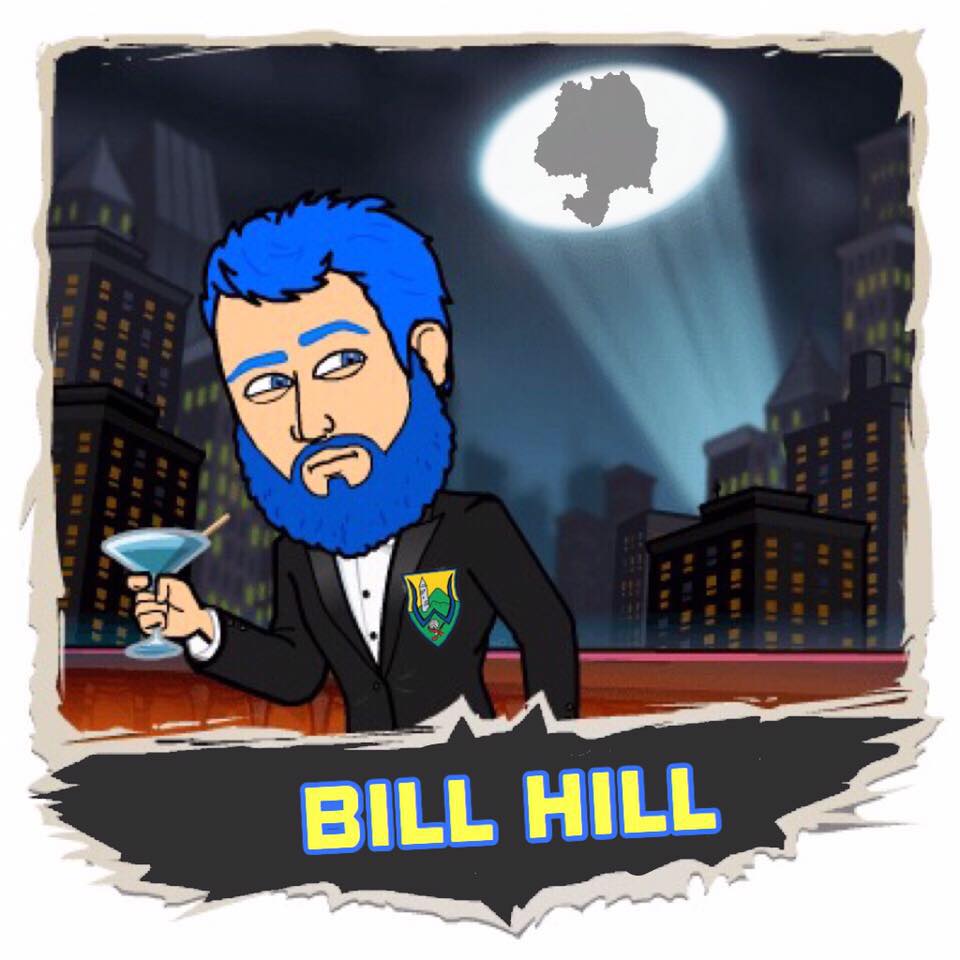 He is a man (as far as we know!). He is certainly a myth. Some will even tell you he is a legend!

Speaking of legends, there are many great names synonymous with Wicklow GAA. Whether they are current or former players, coaches or lifelong servants, there are many names we could list out.

However, this person seems to be in a category of their own.

In an increasingly digitalised world where social media runs rife, it was only a matter of time before an account on one of the many platforms captivated audiences like no GAA player ever could.

The now famous anonymous Bill Hill Facebook account has transformed itself from being a mere cult figure to somewhat of a Garden County icon.

If Bill isn’t jokingly slagging off one of our many towns or villages in County Wicklow with his hilarious photoshop memes and lighthearted humour, he is acting as a citizen journalist, bringing up to date local GAA news to the masses or as a proud ambassador, supporting grassroots sport in the county.

But how did the legend of Bill Hill come to the forefront of our minds? Just how was this larger than life character born?

Like any good Irish story, it all began at a barn dance after a few cold beverages. Standard, really.

“Oh God! I must have set up the account around 2007! I had a very heavy night on the Buckfast and ended up at a Butter Churn Barn Dance in Barndarraig.

“I was having the craic with Jeremiah and Jebediah Crowley, showing them the new Samsung Flip phone I had got to replace my Nokia 3310. I then got fed up of trying to explain the concept of electricity to them, so I got bored and set up a Bill Hill Bebo page and drew on Don Jackman’s wall.

“He put me in his top 16 friends and we have been bff’s for life since then!”

However, as the 2000’s came to a close, Bebo as a social media site was beginning to reach its saturation point, before eventually succumbing to becoming a meme in itself, providing many a moment of cringe for its former users.

With this, Bill needed to move with the times. Before Facebook had the opportunity become the utopia for farming games, irritating notfications and pictures of people’s Sunday roasts, Bill created an account on the site, to much success.

“The evolution of the Bebo page inspired me to move forward with more accounts. It is amazing what a bit of ‘artistry’ and laughing at Jebidiah and the lads in Barndarraig trying to hurl could do for inspiring craic.”

While one of the primary reasons for the page’s existence is craic, Bill also had some more serious motives in terms of spearheading a Wicklow GAA media evolution.

“There was also very poor coverage of GAA and Wicklow sports in comparison to our neighbours, so we tried to do our bit. Radio coverage of local sports was and is not nearly adequate enough. The likes of Garden County Sport are doing a huge service to the people of Wicklow with their online coverage. The Wicklow GAA PR team are doing great, also.”

“The powers that be would probably like to see the back of Bill Hill but we are trying to help in our own unique way and we try relay messages and opinions of sporting fans and players across the county so that things that may not be up to scratch might get corrected.

“There’s so many great volunteers giving up their time to the cause so it’s important that things are always the best they can be and hopefully we can give up our own time to help make that the case.

Now that we have learned the origins of Bill Hill and the motives behind the phenomenon, what does Bill enjoy most about running the account?

“I enjoy playing a part in connecting the county via having the craic and possibly being a page that can be followed where you get bits of info of what’s happening in other clubs. Being able to help when people, players or clubs are in need of info or a dig out is a good buzz.”

And did Bill ever think he would reach his current levels of popularity?

“Not a chance, but popular is a strong word!

“Like if you’re from Arklow, popular is rounding roundabouts repeatedly giving your mate in the civic your horn until you’re tired from beeping him. If the page ever got as popular as how popular it is among Arklow lads to beep their mates on the roundabouts of Arklow then we would have truly made it.”

As Bill is renowned for parodying towns and villages, it was only appropriate we found out who he believes are the county’s easiest targets.

“Lacken! By the time they have developed the technology to see all the slagging we have given them and the telegram they send expressing their displeasure actually manages to reach Bill, his beard will be grey and the only wood that will be rising in the mornings is when he’s angrily shaking his walking stick at the nurse for forgetting to bring him to the Bingo Loco,” joked Bill.

Despite his humorous antics, Bill emphasised that the GAA community in Wicklow is about community and belonging, expressing how he feels that sense of belong in the GAA and wider community.

“The GAA and sport is all about belonging to something, pride in your community, pride in your county. There’s always been so much talk of divides in Wicklow Sport geographically and historically and so many old grudges and agendas and absolute nonsense.

“We all have our own clubs and are extremely proud of them but we are also proud Wicklow people and seeing us actually all pulling the same direction to change Wicklows fortunes would be the dream and just think of the craic we could have if Wicklow could ever be successful. The way the county rallied behind Enniskerry made us very proud to be part of Wicklow GAA. “

As the saying goes, sometimes you have to take a step back in order to take a step forward. Bill Hill sees things no differently, as evidenced by his future plans to truly revolutionise his image.

“Relaunching our Bebo Page is the number one priority, the world needs their Stunnahs!”

As our enlightening conversation with Bill comes to a close, it is only fitting we ask him the question that is on the whole county’s minds – “Do you ever plan to formally reveal your identity?”

“Yes! Pretty sure we would be welcomed with open arms in Mountjoy,” laughed Bill.