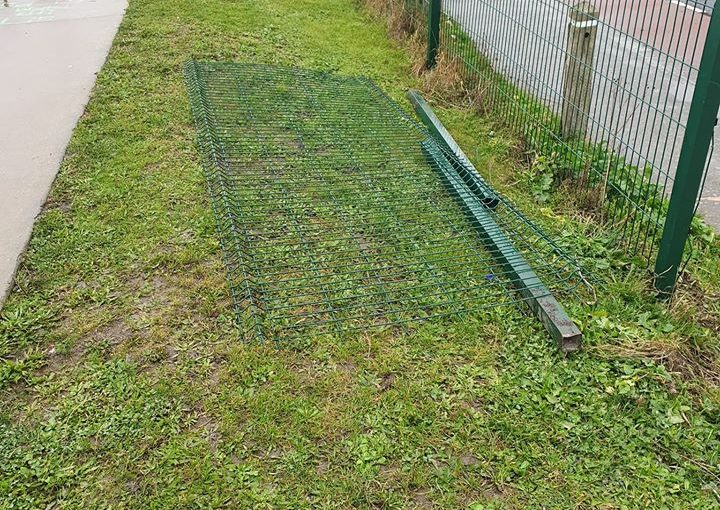 Wicklow Councillors Paul O’Brien and Gail Dunne have expressed their disgust at the acts of vandalism that have taken place at The Murrough Playground in Wicklow Town.

The councillors along with An Garda Siochana visited the scene on Tuesday, where it appears that a section of the fence that separates the kids playground from the main Port Road has been removed.

Councillor O’Brien was particularly aggrieved that the incident was not reported to the Gardaí.

O’Brien commented – “Cllr Dunne & myself parked our party political differences yet again today & along with an Garda Siochana went to view the criminal damage at the playground on the Murrough. We were not just disgusted with this senseless piece of vandalism, but we were taken aback that the incidents had not been reported to the Gardai.

“On learning of this damage, we felt it important to view the playground with An Garda Siochana to see what we can do to protect this amenity. Unfortunately, there seems to be an acceptance that this type of behaviour is okay, well it is most definitely not”

“We have assured the Gardai that we as public representatives will do all we can to assist them in their enquiries & support them in their efforts to catch who ever committed this petty act of vandalism at a children’s playground. The Gardai deserve all our support, we all know how under resourced they are & how hard they work to ensure our safety. If anyone has any information that may assist the Gardai please get in touch,” said O’Brien.

Councillor Gail Dunne also expressed his displeasure, stating – “First they damaged the fencing & while the council were in the process of ordering the new panels, the posts were also damaged. This costs the council alot of money to repair and possibly to the detriment of other vital projects in the Town, we must do all we can to secure the area now and to ensure this doesn’t happen again.”

The councillors released a joint statement mentioning that councillors need to be working together for the betterment of the community they serve.

“I want to work with my fellow councillors in order to do what is right for our communities. I dont believe in taking cheap shots at the Gardai, council officials or indeed my fellow councillors just so I can make a quick headline. Cllr Dunne & myself will now work closely with An Garda Siochana to ensure we do our best to combat this unwanted vandalism. We have worked well in the past & I’m confident we will work well in the future,” concluded O’Brien.

Below are some photographs from the scene of the vandalism.