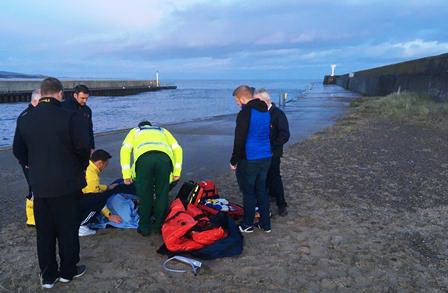 Following an initial Irish Coastguard Launch request, a team of Arklow RNLI’s volunteers responded to reports of injured persons on the end of Arklow South Pier

The volunteer crew members assembled at the lifeboat station and made ready to launch the lifeboat, as they arrived to station the message to cancel the lifeboat launch came in on the crew pager system, It was then reported to the lifeboat crew by members of the public, that 2 persons had been swept from the top deck of the Arklow South Pier to the lower deck by a large wave and they were still there and injured.

After getting our Casualty Care, First Aid Equipment and stretcher from the lifeboat. Our volunteers proceeded by car to the area at Arklow South Pier to check on the status of the reported casualties and to ensure there was no further risk of them or others being swept into the water given the very large waves that were hitting the harbour at the time.

Upon arrival it was ascertained there were 2 casualties who had been on the upper deck of the pier who had been washed down onto the lower deck by a very large wave strike on the harbour wall.

Casualty care was administered by our volunteers to each person who had sustained some injuries.

Both casualties were handed over to the care of the Ambulance crews and they were taken to hospital, our volunteers were stood down.

“Luckily both of these casualties were not washed into the sea when this wave hit, had this been the case we may well have had a very different outcome on this shout”

“I would like to take this opportunity to appeal to anybody going walking in or around harbours, cliff or beaches to please heed the warnings the RNLI and the Irish Coastguard continue to put out nationally,

· Stay Back – Stay High – Stay Dry; when engaged in coastal walks and avoid any unfamiliar routes and be mindful of changes caused by coastal erosion and the risk of trip, slips and falls.

· Ensure that pets are kept under control in case they get into difficulty and cause owners to risk their own safety in attempting to rescue them.”