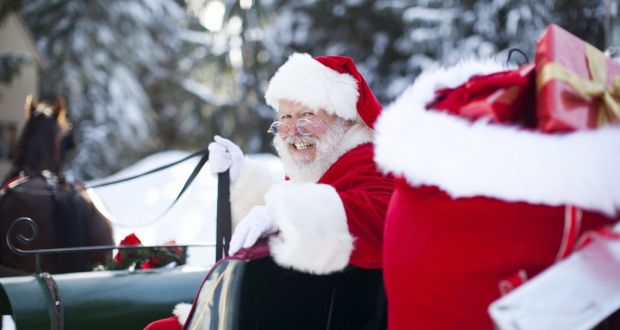 It is a very special evening in Wicklow News Headquarters in Workspace Wicklow Town.

The office and its staff are feeling festive, the Christmas tree and decorations have been erected, the smell of freshly baked Christmas cookies is rife. But there is only one thing missing – an appearance from the big man himself, Santa!

We gaze out the window from our third floor office window and look in awe at the bright lights we see descending from the skies above. It can be no one else! It was none other than Santa arriving for his exclusive interview with Wicklow News!

About a half an hour later, Santa walked into the office and his presence was immediately felt as he let out a sizable “HO, HO, HO!” upon arrival.

He apologised for the delay as he first had to pop into Super Valu across the road to pick up a few groceries for Mrs Claus and his hardworking team of elves back at the North Pole.

He also voiced his exhaustion from the climb up to the third floor of Wentworth Place, but hey we get that all the time here!

After a cup of tea, a few cookies, a carrot for Rudoph and the reindeers, who were strategically parked out the back of the offices, we sat down around the table with Santa for a chat.

Mr Claus demonstrated his brilliant memory for a very old man as he reminisced about Christmas’s of the past, reciting all the gifts he brought for the Workspace employees when they were children.

Obviously, it is not every day you get to meet Santa Claus and have a lengthy conversation, so we had some burning questions to ask the man in famous red robes.

Firstly, with media outlets around the world all vying for the opportunity to talk to Santa, why did he choose take time off from his busy schedule at the North Pole to come to Wicklow?

He provided us with two exceptional reasons.

“I love Wicklow!” Santa said with excitement in his voice.

“The Garden of Ireland truly is a magnificent county, a gem in Ireland. I love everything from The Murrough, The Bray/Greystones Cliffwalk, Glendalough, St Kevin’s Way, all of it!”

“It is certainly a place myself and Mrs Claus would love to visit for our summer holidays in the future, particularly to get down to the Taste of Wicklow and the Bray Airshow!”

“But, most importantly of all, Wicklow is the home to some of the best behaved kids in the entire world! The boys and girls of the garden county really do make my job of checking the list twice very easy and the elves get joy out of making their toys and gifts for them!”

“Rudoplh is also grateful for all the carrots and cookies he receives on Christmas Eve every year!”

So, Santa was full of praise for the Wicklow children, but he emphasised they cannot rest on their laurels and must continue to be good this year and forevermore, starting with Chritstmas Eve.

“As the legend goes, I see when you are sleeping and I know when you are awake. So I urge all kids to be good for their parents on Christmas Eve and go to bed nice and early!”

“This makes things much easier for me and it also helps your hardworking parents get a good night’s sleep,” said Santa.

Much of the World has been intrigued with Santa’s Christmas Eve routine for decades and, while we had him in our company, we took the opportunity to ask just how he goes about delivering presents to children all over the world in one crazy night.

“I start my journey in Asia, eg. China, Japan etc, because they are the first countries in the World to hit nightfall,” Santa explained.

“I then gradually voyage east, towards the likes of Russia and the into Europe. Ireland, and Wicklow in particular, roughly marks the halfway point of my worldwide deliveries.

“Finally, I will conclude Christmas for another year by delivering gifts to the children of the American continents, North and South America.”

After an enthralling hour long chat, it was time for Santa to pack up and return to work in the North Pole for the final stretch of Christmas Eve preparations.

However, before he returned to his fleet of reindeer, he handed out gifts to the entire Wicklow News team to express his gratitude for having him for the interview.

Once again, we gazed out the third floor window of the office as we witnessed the magical lights of Santa’s sleigh relight as he ascended into the distance, yelling out one final “HO, HO, HO, MERRY CHRISTMAS” as he vanished into the night sky.