Judging of the 25,800 entries received in this year’s Texaco Children’s Art Competition is currently underway with winners to be announced in mid-April.

Pictured is adjudicator Eoin Butler admiring two of the entries received from students in Wickow Town this year. From left, they are a work entitled ‘Daisy Field’ by a pupil from Coláiste Chill Mhantáin and another entitled ‘Wave of West Coast’, by a pupil from Dominican College.

In all, over 900 young Wicklow artists submitted entries this year. Currently in its 66th year, the Texaco Children’s Art Competition is the longest-running art sponsorship in Ireland. First held in 1955, it is hosted annually by Valero Energy (Ireland) Limited – the company that markets fuel in Ireland under the Texaco brand. 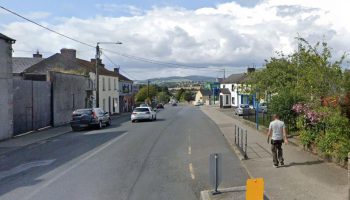