Wicklow Make Up artist turns tables on herself 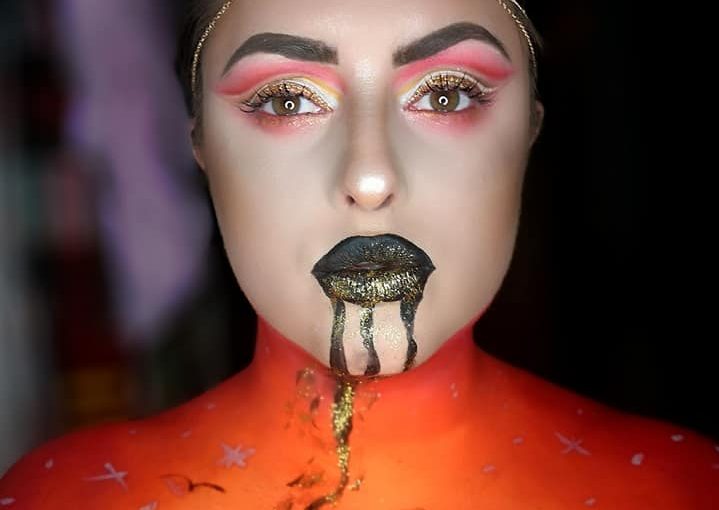 Like many businesses throughout the country when Government Restrictions were announced, Wicklow Make Up artist Sarahmarie Howes she had no option but to shut up shop, but she came up with a novel way of passing the time and showing her body art skills to the public.

“I had to close the salon up when the restrictions came in and with being home and isolated my son keeps me busy all day but in the evenings I was feeling the anxiety set in so decided, I needed an outlet and for me the big stress buster is creativity so I decided to do the bodypaints and obviously through lack of having a model I had to do them on myself, which is actually something I had never done before.

I always worked on other people. I had posted up the first look and said I had asked my 3 year old what I should paint on myself and he said ‘space’, so after that my clients were sending me requests or ‘challenges’ of what to do next so every look I’ve done has been a theme set by a client or follower and I’ve had to paint my interpretation of it.

So each look has been different time wise the one that took the longest was the Earth look as there was a lot of detail in that one with the animals that took probably 3 hours. The rest average from 1 to 2 hours.

I love what I do, I started out in 2008 working on TV, film and fashion throughout Ireland and England and I would have done a lot of special effects and horror looks and that. I then went on to set up “Pretty and Pampered” in 2015.

I’ve won 4 awards in my career one was for special effects in particular and the most recent is makeup salon of the year 2019 and I’m up for the same title again for 2020, as well as makeup team of the year and am hoping it will still go ahead over the summer.”

Take a look at Sarahmarie’s amazing work below