Cllr. Pat Kennedy, new Cathaoirleach of Wicklow County Council, has expressed his outrage at the amount of rubbish left in Glenmalure over the last two weekends by people camping in the valley.

Speaking to Wicklownews, Cllr. Kennedy said “The people who have came into our valley have no regard for either fauna, flora or the local community, they have came here and have run riot, left a trail of destruction and rubbish behind them, even cutting down trees. There was certainly no shortage of money with them as they left behind tents, food, clothes BBQ cookers. A stop has to be put to it, last Monday evening the PURE Project volunteers collected nearly a tonne of litter and rubbish leaving the place spotless, if you seen it now you would think no one ever picked up a thing.”

“The Glenmalure Pure Mile group do fantastic work in the valley to keep it at its best but they shouldn’t have to deal with this. Over the last number of months, we haven’t had this problem as restrictions have been in place. Now that people are starting to use the valley once again, the issue has returned. It’s fantastic to see people using the valley but they have to be responsible. Locals have had to put up with this continuously for years now and something must be done.”

Cllr. Kennedy said that he raised this as a matter of urgency at last weeks Arklow Municipal District meeting. “Measures are needed to prevent this from happening and I raised it at the last Arklow Municipal District meeting I will be arranging a meeting as soon as its feasibly possibly with the relevant stakeholders with a view to trying to put measures in place to combat this”. 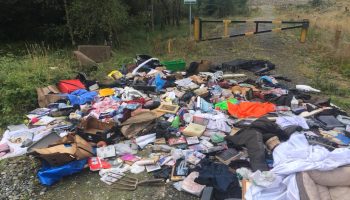 Fine and driving ban for flytipper

Visitors reminded to leave nothing only footprints