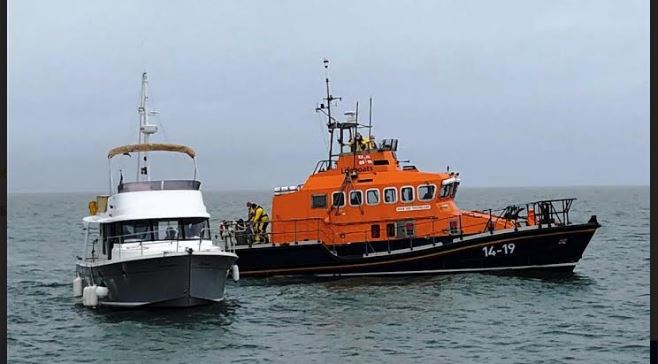 Last Saturday (18 July) at 8.30am the Irish Coastguard requested the launch of the Arklow Lifeboat.

A short time later the charity’s volunteers launched the station’s All-Weather Lifeboat Ger Tigchlearr, the crew headed out of Arklow harbour and set course for the reported position of the casualty vessel.

As Arklow Lifeboat made its way to the location, 2 of our fellow volunteers were aboard the Wind Cat wind farm support vessel on their way out to works on the windfarm and had noted the vessel appeared in difficulty.

They made their way to the vessel and offered assistance. They ascertained the stricken vessel had lost propulsion due to an entanglement of rope in its propeller.

Within a few minutes Arklow RNLI were on scene approximately 1 mile south of Arklow.

It was established the 10 metre motor-boat had become entangled in rope lines and had lost propulsion completely.  A tow line was rigged and once set up the entanglement was cleared and the motor vessel with 2 persons aboard was towed back into Arklow Harbour, where all hands came ashore safely,

“Thankfully the skipper of this vessel made the call to the Coastguard and requested assistance early, this is the key to ensuring our lifeboat can get to casualties on time, always remember to have your means of calling for help with you and always wear your lifejacket”