This afternoon Arklow Lifeboat was launched just before 3pm following a pager alert and receipt of a report of a vessel with nobody aboard, having been located by a passing motorboat.

Arklow’s All Weather Lifeboat Ger Tigchlearr proceeded to the initial reported sighting of the empty vessel North East of Arklow.

With no sign of anybody aboard the vessel, Arklow RNLI commenced a search of the reported area for potential casualties in the water, the motorboat who had sighted the stricken vessel initially had proceeded to tow the casualty vessel to Arklow.

Given there was no one reported aboard the vessel, the Arklow RNLI volunteers had to assume there was potentially casualties in the water and plotted a search pattern to search of the area.

Given the large area which was potentially to be covered, Wicklow RNLI Lifeboat Jock&Annie Slater was also tasked to the search along with Coast Guard Rescue Helicopter rescue 116 from Dublin.

Other local vessels diverted from their work and came to the area to assist in the search.

As the afternoon wore on and with the search looking like it might continue into the evening, news came through that a vessel had broken its mooring near a local holiday park North of Arklow Harbour, this information was later confirmed.

All vessels and the helicopter were then stood down and all then returned to their respective bases.

“This unusual call out was a difficult one for all involved, with the vast area involved it was going to be a real challenge to locate any casualties in the water, we’d like to say a big thanks to the helicopter crew, our Wicklow RNLI colleagues and all of the various other vessels who assisted in the search, special thanks to the crew of the motorboat who had initially spotted the stricken vessel, luckily there was no one in the water and it turned out the vessel had broken a mooring further up the coast. 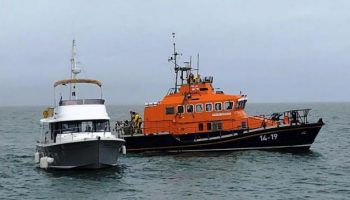