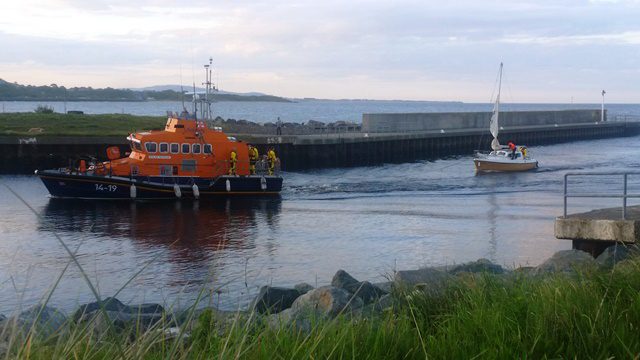 On Saturday 11 July at 7.10pm the Irish Coastguard tasked the RNLI lifeboat station at Arklow to launch following reports of 2 Persons adrift in a reported dismasted yacht at an unknown location in the Irish Sea.

A short time later the charity’s volunteers launched the station’s All Weather Lifeboat Ger Tigchlearr , The crew headed out of Arklow harbour directly and immediately commenced a search. Given the high risk nature of the report, the Coastguard also tasked our Northern Flank station at Wicklow RNLI and also Irish Coastguard Helicopter Rescue 116 to the area. The Irish Customs Cutter Faire was in the area and also joined in the search.

With all vessels and the Rescue Helicopter now actively searching the area it wasn’t long before the vessel was located by our colleagues in the helicopter. Following receipt of the position, Arklow RNLI Coxswain Ned Dillon, took Ger Tigchlearr to the position 6 miles South of Arklow.

Once on scene, one of our crew members was put aboard the stricken vessel to assist the 2 persons which were aboard. The yacht had lost sails and then lost its back up engine power. The 2 persons aboard were also assessed and found though a little shaken, to be ok to stay on the vessel.

A tow line was then set up and the yacht was taken on tow back to Arklow Port.

The other vessels and rescue helicopter were then stood down. Following the tow to Arklow all hands came ashore safely.

“With the country slowly getting back to the new normal following lockdown, lots of people are taking to the waves, I would like to remind anyone going to sea to always wear your lifejacket and carry a reliable means of calling for help like a VHF Radio and also ensure you plan effectively for your journey, Thankfully we were able to get to these 2 casualties in good time and bring them home safely. Thanks too to our colleagues from Rescue 116, Wicklow RNLI and the Crew of the Customs Cutter Faire for their assistance on this shout”