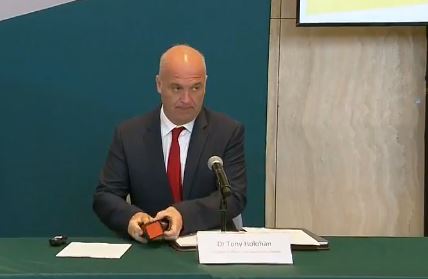 In a statement he said, He wanted to give his time to his wife Emer and his teenage children Clodagh and Ronan, Emer, was diagnosed with multiple myeloma a form of blood cancer in 2012 and was admitted to palliative care last Saturday.

” I would like to thank everyone for their support, understanding and respect for my family’s privacy and would wish that to continue. Continue to stay vigilant and look after each other.”

Former Heatlh Minister Simon Harris said “Tony Holohan is a patriot, an incredible public servant & a doctor who has saved thousands of lives through his leadership. He has kept us safe. I valued his counsel as Minister so much. Thank you to his family for sharing him with us. We think of them & respect their privacy.”

While new Minister for Health Stephen Donnelly said “As Dr Holohan steps back at this difficult time for him and his family, our thoughts are with them. I want to acknowledge the extraordinary work he’s done helping lead Ireland’s response to Covid.”