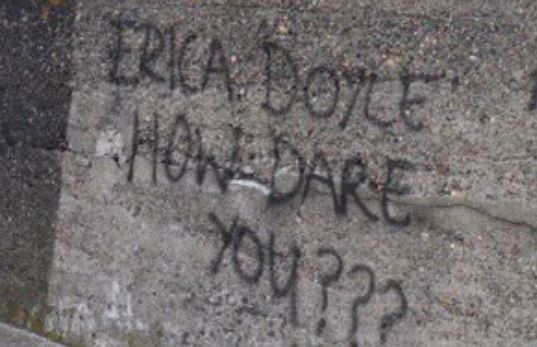 Cllr Paul O’Brien said “Since I was elected last year I have continuously highlighted the issue of online hate and bullying. This is is a worrying development of people emboldened with hate against LGBT people, black and ethnic minorites taking to our public places. Its not acceptable to bully and harass people in any town or village in Co Wicklow through racist, homophobic and mysogynistic hate speech like this”

Cllr Anne Ferris said “As Cathaoirleach of Bray Municipal District this worries me that our town is being covered in hateful messages. This vile hate has been painted on numerous walls and even a car in our town. I know many people of colour and lesbian, gay, bisexual and trans residents who are ashamed but also scared. I will work with all my Council colleagues to send out a clear message. Bray people stand for love and reject this hate. Furthermore all of us in Bray condemn the vile hate campaign against Cllr Erika Doyle ”

Bray representative Ian McGahon said “I was proud in 2019 to organise that over 50 local election candidates for Wicklow County Council signed an anti racist pledge. As an out gay man this vile hate speech about LGBT people worries me. This hate is openly threatening us and could potentially become violent. I am confident the vast majority of Bray people reject it”

Greystones representative Anne Waithira Burke said “During 2019 local elections I was targeted with racist and mysogynistic abuse. It is time for us all locally to stand together against these hate campaigns”

The 4 Labour representatives stand in solidarity with Cllr Erika Doyle and with all targets of Brays recent spree of graffiti hate speech.