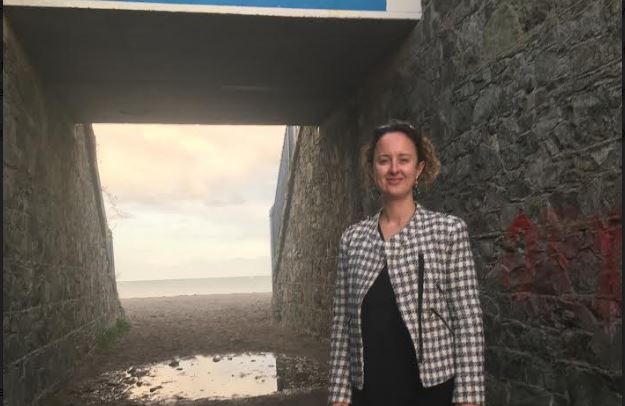 Social Democrats Cllr for Greystones, Delgany, Kilcoole and Newcastle has this week confirmed that Irish Rail will fix the existing railway bridge at the second arch by South Beach playground in Greystones where flooding frequently occurs.

Cllr Jodie Neary had contacted Irish Rail after a recent spate of flooding prevented access to dog walkers, swimmers and commuters walking from the Dart to the Park n Ride.

“Flooding under this bridge has been going on for years. I remember it flooding as a kid, so in some way we have learned to live with it however, with an increase in the number of families in the area using our much loved amenities including the South Beach playground, I felt it was time to address this once and for all. Particularly, during COVID, many people are enjoying the outdoors more than ever so access is a central issue here.

“It has also been an issue for many commuters who will know after heavy rains water will remain on the footpath for days, sometimes never clearing up in time before the next rainfall. This will only worsen during the winter months and while the number of commuters has decreased since COVID it still needs to be addressed.

“I had contacted the Council about flooding between the railway bridge and the Park n Ride which sometimes meets along the path by the playground but was told it is quite a significant job that would require funding that is not currently available. They pointed to the fact that the problem partly remained under the responsibility of Irish Rail who own the bridge at the second arch.

“During rainfall, water collects at the railway line and drips into a pool of water where water from other areas meet underneath the bridge. I contacted them to see if they would consider fixing the bridge to alleviate the collection of water in this area and address access issues for people who enjoy the local amenity.

“I was delighted to receive confirmation from the engineer and infrastructure Department in Irish Rail that they have now reviewed this issue and are working on a solution to rectify the problem. They are working with a target to complete works by the end of this year or early 2021” concludes Cllr Jodie Neary.