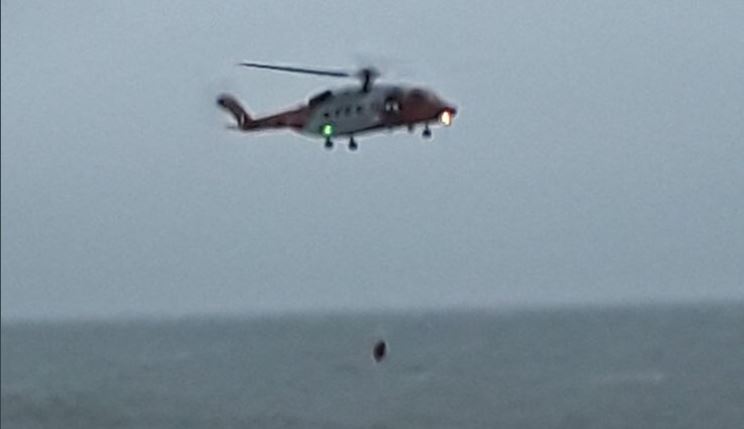 Greystones Coast Guard Unit along with Rescue 116, Greystones Gardaí, Greystones Fire Service and National Ambulance Service where all tasked by MRCC Dublin to a swimmer in difficulty off Greystones South Beach this afternoon.

“A female swimmer was caught in strong currents, rough water and was unable to return ashore.

A passing lifeguard tried to assist her but conditions at the time were dangerous. He managed to get a life ring to her, before having to return to shore.

Our boat was crewed and ready to launch but conditions were at our maximum allowed and therefore it was decided that Rescue 116 would attempt to rescue her first, while our boat crew were on standby.

Rescue 116 successfully rescued the female and landed on Greystones South Beach where she was handed over to NAS Paramedics. Both the lifeguard and the casualty were brought to St. Vincent’s Hospital for assessment.

This swimmer owes their life to the quick reactions of the passing lifeguard and speedy response of Rescue 116. Remember, if you see anyone you think may be in trouble on the sea, our beaches, rivers, lakes, cliffs, headlands or inland waterways, dial 112 and ask for the Coast Guard.”