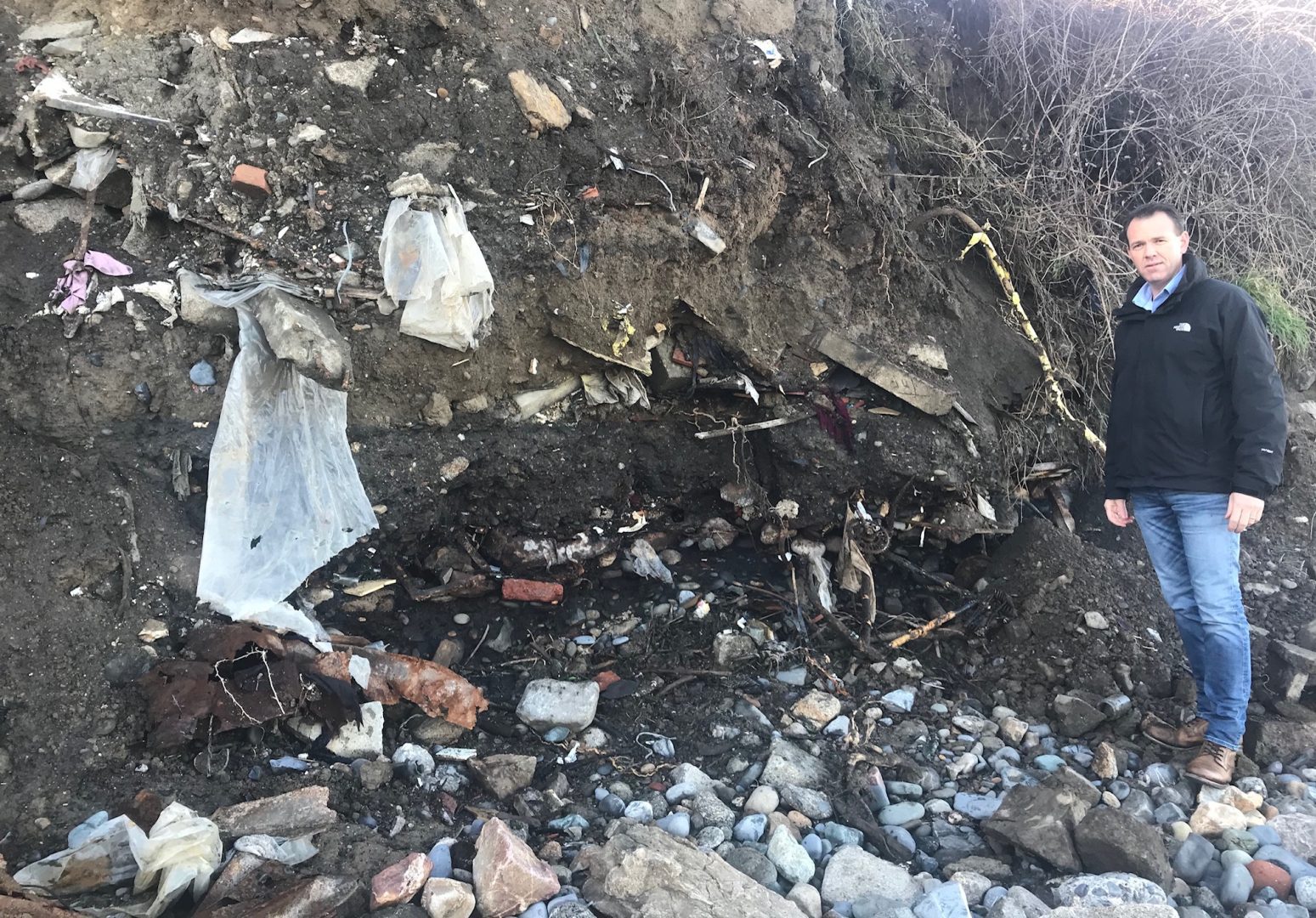 Wicklow Sinn Féin TD John Brady has warmly welcomed the signing of contracts to carry out work at the North Beach in Bray to stop the old Bray municipal landfill being washed into the Irish Sea. The contracts were signed last week and work on the €2m coastal project is expected to commence in the coming weeks. This will bring an end to the 14-year campaign that the public representative has been involved in to address the serious environmental issue.

Welcoming the news Deputy Brady said “The signing of the contract last week to address the environmental disaster that has seen the old Bray municipal landfill at North Beach in Bray being washed into the sea is really welcome news. I have been working on this important environmental issue for the last 14 years. When work starts on the coastal protection project in the coming weeks it will thankfully bring an end to this sorry chapter which has seen tonnes of waste being washed into the Irish sea from the old dump for many years.”

“The old dump which is located on the border between Wicklow and Dublin was used by the local authorities in Bray right up until the 1960s. It’s estimated that it contains more than 104,000 cubic metres of waste including, asbestos, excessive levels of ammoniacal nitrogen, potassium and manganese. Due to coastal erosion the old landfill has been getting washed into the Irish Sea, causing an environmental disaster.”

“It is hoped that the contractors carrying out the work will be on site before Christmas, with the substantive work commencing in January. Work on the €2m project is expected to take 6 months to complete.”

“Unfortunately, it has been a very slow and frustrating process to get to this point. I had to lodge a formal complaint with the Environmental Protection Agency (EPA), ultimately, this is what pushed Dún Laoghaire-Rathdown County Council into finally putting in place the Coastal Protection scheme.”

Deputy Brady went on to say “A comprehensive traffic management plan has been put in place as a large volume of rock will be required to be transported to the site. The scheme consists of the placing of an armour stone revetment at the toe of the cliff at the landfill and stabilising the cliff face above by re-grading to a long-term stable slope. The work will prevent contaminated material reaching the foreshore.”

Cllr McManus has also welcomed the news, saying “I know the community of Bray is passionate about protecting our environment, so I know this work is very welcome in that regard.”

“The scenery at the location is stunning, and there is some positive potential for the place to be transformed for the enjoyment of the community. I look forward to working to see how we can contribute to make that happen now that these important works are finally taking place”

Cllr Dermot O’Brien said, “As we enter the final decade of the UN Sustainable Development Goals agenda it is important to recognise that actions like this make a very tangible contribution to a sustainable future for all.”

Deputy Brady concluded “It is planned to maintain beach access by means of a path along the cliff top and a set of access steps down through the revetment at the northern end. I look forward to this area now becoming a public amenity as opposed to an old dump that is an environmental disaster by being washed into the Irish sea.”