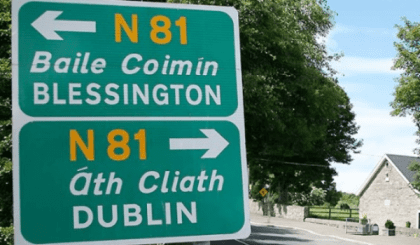 Fine Gael Cllr for the Baltinglass MD, Avril Cronin , has raised the  issue of the need for improved transport and transport infrastructure  for West Wicklow with the National Transport Authority.
During a recent meeting of the Eastern  and Midlands Regional Assembly , Cllr Cronin questioned the NTA on their plans for West Wicklow as part of the NTA GDA Transport Strategy.

During the meeting the NTA outlined their plans for a”West Wicklow Study”  as part of their Strategy Development Analysis Work.

Cllr Cronin raised the urgent issue of the upgrade of the N81, the lack of public transport  in the area and poor transport infrastructure in West Wicklow.

Cllr Cronin said, We are caught in the middle here in West Wicklow. If we look to the east of the county we can see ongoing developments to improve the N/M 11 and the Dart Service from Dublin to towns and villages on the east coast of the county. In Kildare we have seen major improvements to the N7 in recent years and also improved services to the train line from Kildare to Dublin, but unfortunately West Wicklow is stuck in limbo, with no improvements in sight in the near future.

“In 2007 I was working as a student on summer placement  in the National Roads Design. Back then, in 2007, they were in the process of planning the preferred  route for the N81, yet  here we are today,  in 2021 begging the NTA to consider the upgrade of the N81 and put it back on the agenda”, said Cronin

“It is the main route for West Wicklow to Dublin and the only route national road exiting Dublin. Families and land  owners are left in limbo, wondering if this upgrade will ever happen”

Highlighting the lack of public transport in the area , ” We have 1 bus route along the N81 passed Blessington, the Bus Eireann 132, which is in need of a permanent bus stop at Hollywood Cross in order to stop and pick up passengers.  The 65 serves Blessington and surrounding areas, but  if you live south of Russborough , your travel options are limited”
Cllr Cronin has urged the NTA to look at all aspects of transport and transport infrastructure in West Wicklow.

Upgrade of Dunlavin Water Supply needs to be prioritised – Cronin