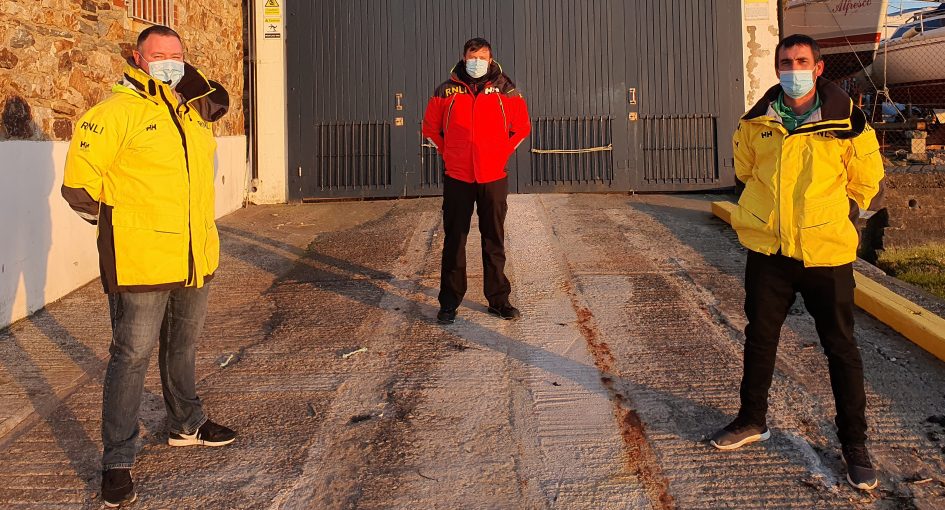 Wicklow RNLI volunteers Graham Fitzgerald and Alan Goucher have been passed out as deputy coxswains by a RNLI Trainer Assessor, after undertaking months of training and completing a rigorous exercise on the all-weather lifeboat in Wicklow bay.

Graham Fitzgerald who has been a volunteer crew member for the past eleven years, and Alan Goucher who joined Wicklow RNLI in 2011, launched on an operational exercise with a RNLI Assessor during the week.  The exercise involved boat handling tests and various emergency situations to test their skills. Both volunteers successfully carried out the tasks and were passed out as deputy coxswains by RNLI Trainer Assessor Alan Pryce after completing the exercise.

Over the last decade Alan Goucher and Graham Fitzgerald have been involved in many rescues and in July 2014 they were praised for their bravery when they pulled a woman from the water and saved her life at the Silver Strand Beach. Graham and Alan received letters of commendation from the Operations Director of the RNLI George Rawlinson, for their actions during the rescue in 2014.

In the letter to Alan, Mr Rawlinson wrote: ‘Your willingness to swim into the cave and use of your local knowledge to extricate the casualty safely ensured a good outcome on this rescue. I commend your commitment and professionalism.’

Mr Rawlinson commended Graham Fitzgerald on his quick decision making, saying: ‘During the rescue, you demonstrated calm and sound command of the incident, quickly gaining the required information and assessing the risks involved in committing your crew to enter the water.’

Wicklow RNLI Operations Manager, Mary Aldridge said: ‘Alan and Graham have over 22 years’ service between them as volunteers at RNLI Wicklow, and we are delighted with their achievement this week. Both have grained a lot of experience and have been involved in numerous rescues resulting in the saving of many lives. They have both worked extremely hard during the assessment to become deputy coxswains. This was made more difficult in recent times with Covid-19 and the suspension of training for a time. Great credit for Alan and Graham’s achievement is also due to the support from their families, trainers, assessors, and the crew who generously shared their knowledge and experience to prepare Alan and Graham as deputy coxswains.’