Cllr Tom Fortune speaking yesterday said that it is way beyond time for the hassle of our fishermen to stop.

“Boats have fished in Greystones for hundreds of years. Greystones was originally a fishing village. What occurred last Friday can not be allowed to be repeated. Greystones I believe is the only port in Ireland where fishermen are been frustrated in doing their work and provide for themselves and their families.

The Gardai had to intervene on Friday and they were excellent , they defused a very dangerous situation.

It raises serious questions around the PPP ( Public Private Partnership ) process, certainly the way Greystones harbour was processed. It appears to be forgotten that the state through Wicklow County Council invested thirty acres of foreshore in this project. At the time I was told in answer to a question that land in Greystones was valued at 4 million an acre. WCC in my view have a massive responsibility for this issue.

Resulting from the serious incident on Friday last a meeting was held yesterday ( Wednesday) in Clermont Campus in Rathnew. In attendance were SISPAR / BJ MARINE / Gardai/ Paddy McCauley / Five of the SIX district councillors. WCC attended as observers. Everyone had their  say, the discussion was hard at times but constructive and professional. Some points may require legal opinion.

Hopefully the meeting will result in a complete solution that enables the fishermen carry out their daily work as should always been the case. He says the outcome of a flawed process from the start has brought us to where we are today.

Cllr Fortune concluded that reflecting on what has gone on for a number of years and was highlighted again yesterday that SISPAR and Wicklow County Council must resolve this.

It is their creation and I believe they have a duty of care to our fishermen and our community. It has been allowed to be an arm wrestle between The Fishermen and BJ Marine, this I believe is totally wrong.

SISPAR AND WCC must do what should have done day one and was promised back then, that the fishermen were to be included in the harbour operation.

I can not understand how SISKS can allow this to continue. I am calling on SISPAR to put professional standard facilities into the harbour for the fishermen and that they get this done in the next four weeks.” 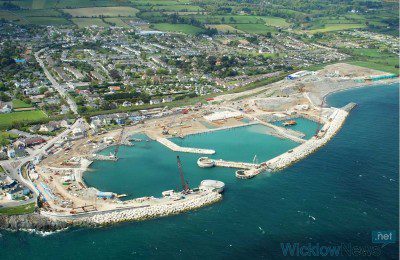