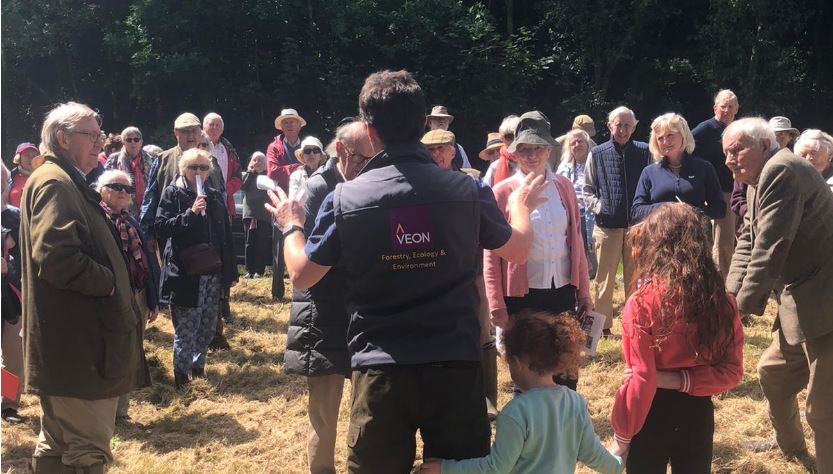 Recently , The Irish Tree Society met at the Coollattin Estate for the first time since the Society’s successful battle to save Tommnafinnogue Wood for the Nation. That battle lasted over twenty years and won a reprieve for the last stand of native Irish oak in an ancient woodland setting, thus preserving an ecological and cultural treasure.

Following decades of neglect, Coollattin is being brought back to its 19th century magnificence, when it was known for producing some of the finest oak in Europe.  When the Houses of Parliament were being rebuilt after being destroyed by fire in 1834, the architect, Charles Barry, specified oak from Coollattin.

As invasive species such as Laurel and Ponticum Rhododendron have been removed, 50,000 native Irish trees have been planted on the Estate including 10,000 oak trees and a valuable collection of rare species from around the globe, many of which were sourced by Dublin plantsman and nurseryman, Finlay Colley.   The newly created Quercetum is now home to 85 taxa of oak and there are plans to increase this number over the next few years.

Welcoming the Society, Brian Kingham said:  “All of us here today love the majesty of trees.  There cannot be a more important moment from the point of view of climate change and the environment for us to be planting trees.  Like so many I had imagined that Ireland had a huge population of trees yet we have the second smallest forest land (proportionally) in Europe.   Just 11% of the island is covered with forestry, of which just 2% is made up of native Irish trees.  To see Coollattin being returned to its earlier splendour is a huge pleasure.”

Joe Codd of Veon Forestry, Ecology and Environment, who undertook this major sylvicultural project from the outset said: “Coollattin is now one of Ireland’s great forest treasures and is proudly playing a significant part in restoring Ireland’s arboreal heritage.  I am delighted with the initiative to help to produce more native oaks in Ireland by the registration of 74 acres of woodland within the estate as a Seed Collection Stand for Quercus petraea and Quercus rubur.  This woodland is adjacent to Tommnafinnogue Wood, which was the main collection area in the past. “

Two rivers run through the Estate, the Derry and the Coolboy, and with the help of Donnachadh Byrne, Senior Fisheries Environmental Officer, work has begun to repair long term damage to the original spawning and nursery habitats for salmon.  In January 2021, salmon were seen where the Coolboy and Derry merge.

Following the visit, Thomas Pakenham of The Irish Tree Society wrote “the place has been transformed since I was last there. The Arboretum is going to be the largest and most ambitious in the country.  Apart from the Heathcote-Amory Quercetum in Devonshire I cannot think of any rival in these islands”.