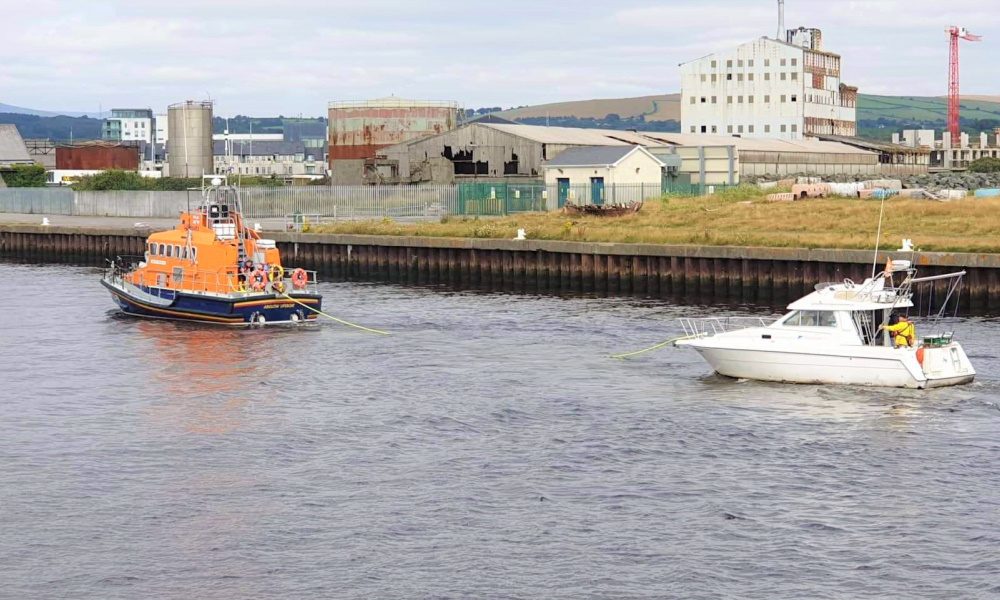 Following a launch request at 11am today Sunday 1st August 2021, our volunteers responded quickly with most having been nearby the station. Within minutes the Lifeboat Ger Tighclearr was underway with Coxswain Ned Dillon at the helm and heading to sea to reports of a vessel which had lost propulsion.

Arklow RNLI volunteers were busy on Sunday morning after a callout to attend a vessel which had lost propulsion.

Luckily crew members were nearby the station and were within minutes out aboard Lifeboat Ger Tighclearr, with Coxswain Ned Dillon at the helm.

The casualty vessel was reported as being one quarter mile North East of Arklow Harbour entrance.

Once on scene, it was established that the 10.5 motor cruiser with two crew aboard had become entangled in fishing gear and assistance was required aboard to clear the entanglement.

An RNLI volunteer went aboard the casualty vessel to assist, but after efforts to clear the props failed the RNLI crew decided to tow the vessel to safety.

The boat had been acting as a support vessel as part of the local Sailing Regatta.

The full RNLI Volunteer crew for this callout were:

“Thankfully a positive result this morning. I think this callout goes to show literally anybody can become entangled in fishing gear, indeed I have myself as have other members of our own crew.

“I’m delighted the time and effort we spend on delivery of our Community Safety Plan and our interactions with all of the groups and clubs who use the harbours and river keep the water safety message to the fore in peoples minds.”

Full safety information on whatever you do on or in the water can on www.rnli.org/safety or www.respectthewater.com.