Wicklow’s Wonder Women to be celebrated 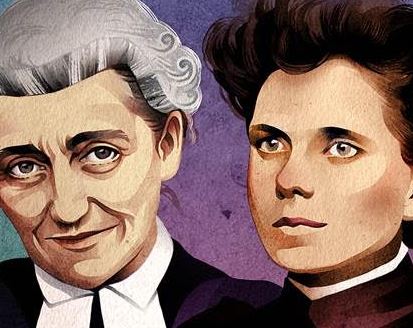 The lives of two trailblazing Wicklow women – Averil Deverell and Kate Tyrell – will be celebrated with special events next week.

As part of the ‘Decade of Centenaries’, Wicklow County Council’s Arts and Heritage Offices and the Archives Service have joined forces with ‘Herstory’ and curator Liz Kelly to produce ‘Wicklow’s Wonder Women’, a fantastic programme of events to celebrate the centenaries of both ladies.

At the time, only men were allowed to be employed in these roles. Both women smashed the glass ceiling to rewrite the gender rulebooks for their professions, leading the way for future generations of female lawyers and seafarers.

It was forbidden for women to captain a ship but that didn’t stop Kate from registering her captaincy in the name of a man in order to sail. Tyrrell spent most of her time captaining the ‘Denbighshire Lass ‘ from her base in Arklow, becoming adept at navigation and passionate about all aspects of sailing. She had a reputation for being a stern enforcer of order on board her ship, intolerant of any drunken crew members on duty.

The Denbighshire Lass continued to sail throughout World War I, navigating landmines in the Irish Sea without incident, despite having no insurance. Kate’s was the first ship to fly the new Irish tricolour flag at a foreign port.

Averil Deverell was involved in Irish Law at the foundation of the judiciary and court structures in Ireland.  Graduating with a law degree from Trinity College Dublin in 1915, in the middle of World War I, she served as a VAD Nursing Sister at Trinity and in her hometown of Greystones. Eventually she persuaded the authorities to allow her into France as an ambulance driver in 1918 where she served with the French Red Cross.

Aware that the Sex Disqualification (Removal) Act 1919 was heading for the statute book, she opted to train as a barrister and entered the King’s Inns, Dublin in January 1919.  In November 1921, Averil was called to the Bar in Dublin with Frances Christian Kyle from Belfast, the first two women to be admitted. Averil entered the closed, male, confines of the Law Library at the Four Courts in January 1922, becoming the first practicing woman barrister in Ireland.

The ‘Wicklow’s Wonder Women’ programme features a spectacular light show, historical talk, experiential Brehon Law Court workshop and fascinating salon event. All events are open to the public and booking is essential, with the exception of the light show which is free.

“Wicklow County Council Arts and Heritage Offices and Archive Service have commissioned these projects to mark women’s history and outstanding achievements as part of our ongoing Decade of Centenaries Programme in 2021. Supported by the Department of Tourism, Culture, Arts, Gaeltacht, Sport and Media under the Decade of Centenaries 2012-2023 initiative, two trailblazing Wicklow Women take centre stage and we are delighted to work with Liz Kelly Curator, and Herstory to commemorate and celebrate Averil Deverell and Kate Tyrell in their home county”, said Jenny Sherwin, Arts Officer and Deirdre Burns, Heritage Officer Wicklow County Council

At 5 pm a spectacular Herstory Light Show by Dodeca will see The Cove in Greystones illuminate with newly commissioned portraits of the local legends by artist Lauren O’ Neill. The heroines will be in lights again at 8.30 pm in Arklow Harbour, where Kate Tyrell navigated her ship ‘The Denbeighshire Lass’ across the Irish Sea. Throughout the weekend, look out for especially commissioned portraits of both Averil Deverell and Kate Tyrell on billboards in Arklow and Greystones.

Dr Sinead McCoole will talk about her research work on the Mná 100 project. She will welcome guest John Mahon, grandson of Kate Tyrell, who will be in conversation with Sinead about his grandmother, her life and her work. Pre booking is essential.

Master storytellers CandleLit Tales will host a Brehon Law Court workshop at the Mermaid Arts Centre in Bray. This experiential event will explore contemporary society’s approach to wrongdoing, lawbreaking, and harm to individuals and community. For centuries, Ireland operated without prisons or police, tackling legal issues through the Brehon law – a complex and fascinating legal code that focused on restorative rather than punitive justice. In this workshop, participants will test out the Brehon law by holding their own trial.

We celebrate Wicklow’s Wonder Women with The Breaking Ground: Wicklow’s Pioneering Women Salon which takes place at the Whale Theatre in Greystones. This collaboration with Herstory will interweave lively conversation with performances by visionary local poets and musicians. Poets Jane Clarke and Nuala Ni Dhomhnaill will read new poems inspired by the Wicklow trailblazers, alongside cellist Lioba Petrie and soprano Catherine Redding.

Hosted by journalist and broadcaster Dearbhail McDonald, speakers include historian and retired judge Liz Goldthorpe; Chair of the Bar Council Maura McNally, and lawyer and chair of AkiDwA Ashimedua Okonkwo. Together they will discuss Averil Deverell’s contribution to the law and share stories from their own career history. Also in conversation about women and our connection to the sea will be daily sea swimmer and writer Ruth Fitzmaurice, renowned Irish surfer, marine social scientist, and artist Dr Easkey Britton, and Dr. Karen Weekes who is training to become the first Irish woman to row solo across the Atlantic.