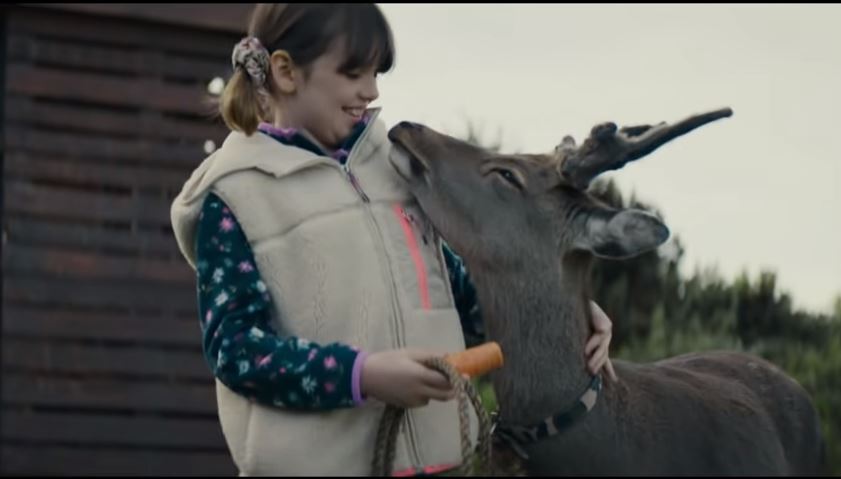 The new Christmas SuperValu ad which was filmed in Wicklow town is set to be a big hit on TV screens this Christmas, the ad which hit the screens this week is a real tear jerker.

The ad was filmed at Seafield in the Dunbar area of Wicklow town at the end of October.

The advert features Deermuid the Deer and 9-year-old Aoife and gives a subtle nod to the country’s resilience over the past 18 months, the retailer explained.

This year’s advert captures the true belief and magic of Christmas as Deermuid finds himself in unknown territory, hurt and struggling to make his way back to normal life, SuperValu said.

Aoife wakes up early one morning to find the wounded deer in her back garden.

She sees the importance and urgency in getting the deer nursed back to health so that he can resume his normal duties of helping Santa.

Aoife and Deermuid become real friends as he puts his trust in Aoife to help him.

The community of neighbouring children rally around with encouragement and belief in the magic of Christmas and Deermuid is finally able to magically take flight and make his way back to Santa and return to his natural way of life.

Commenting on the advertisement Shane Lynch, retail marketing manager, SuperValu said, “We are excited to release our 2021 Christmas ad and hope that viewers across the country can connect with and find moments of belief and joy in Deermuid the Deer, little Aoife and the community of children that support them. Deermuid and Aoife formed such a good bond which really comes through in the advert.

“Both were true professional’s and everyone involved really embraced the magic of what we wanted to deliver. The advert demonstrates that there is always magic to share at Christmas and I’m confident that this will certainly win the hearts of the nation,” he added.

Adding an additional layer of magic to this advertisement is the fact that that the deer that plays a central role is in fact named Deermuid in real life.

Eddie Drew, Deermuid’s deer handler, giving some background on the rising star said, “Deermuid is nine years old and absolutely loves people. He was sadly abandoned by his mother as a fawn, but this meant he was bottle-fed and grew up on a farm, making him extremely sociable and comfortable with humans.”

Deermuid lives with Eddie in Kilmacanogue, Bray, Co. Wicklow and even has his own house on the paddock. Drew adds, “He’s fed twice a day with water, carrots and Sean’s Brown Bread which is his absolute favourite.”

In the ad, Deermuid the Deer finds a loyal companion in Aoife who is played by budding star nine-year-old Penny Lynch.

Speaking about being part of the project, Penny said, “Filming the ad was the best week ever! Even though the weather was terrible I still had the most fun with Deermuid. Deermuid and I had two playdates before the shoot so we were good friends from the beginning.”

Speaking about how she found out she’d gotten the part Penny added, “It was all very quick and I was so surprised. My drama teacher asked if she could put me forward for an audition and just a week later, I got the call to tell me I’d got it!”.