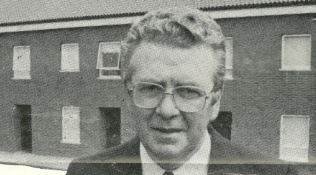 The death has been announced of former Labour Minister Liam Kavanagh.

” It’s with great sadness that I learned today of the passing of Liam Kavanagh, our former TD & Minister here in Wicklow. Anyone that I ever spoke to about Liam around the County would always say the same thing, that he was a great TD, Minister & colleague, that did so much for so many. I think one of his greatest accomplishments as Minister for the environment was when he eradicated the housing list because he built so many houses in the 1980s & 90s.

At the back of it all though Liam was a very quiet reserved decent man who was respected by all. He was a great mentor to have & someone that I’ve always looked up to & aspired to be like.

My sincere condolences to his wife Margaret, his daughter Rosemary & all the Kavanagh family. May he rest in peace.”

“I was saddened to hear today of the passing of our former TD and Minister Liam Kavanagh who was a giant of Wicklow politics over many decades. Liam made a huge contribution both locally and nationally during his time as a Cllr, TD, MEP and Minister, and was viewed as a quiet kingmaker within the Labour Parliamentary Party.

“One of Liam’s great legacies is the thousands of council homes he built during his tenure as Minister for the Environment in the 1980’s. In the worst of economic times, Liam ensured a comprehensive building programme was put in place and delivered on. His example is one that shows what the State can do when the political will is there to deliver public housing.

“First running for the Dáil in the 1968 by-election after the death of his uncle, Labour TD Jim Everett, Liam polled a very strong 21.9%, but was unsuccessful. He reclaimed the Labour seat in the 1969 general election and went on to hold it through a further eight general elections, until narrowly missing out in 1997. Liam also served three times as an MEP, being appointed in 1973 and 1977, and winning election from Leinster in 1979, in what was a massive victory for the Party nationally when Labour won four seats.

“Liam’s Ministerial service began in 1981 when he was appointed Minister for Labour and the Public Service, and he took over as Minister for the Environment in 1983 remaining in that office until 1986. He also served as a member of the British-Irish Parliamentary Assembly, was Chair of the Semi-State Bodies Commission from 1995 to 1997, and was a member of the Standards in Public Office Commission after it was set up in 2001, showing the depth of his interests and deep commitment to public service.

“Throughout his career, Liam was dedicated to the values of the Labour Party, serving his community and the people he represented with determination, honesty, and integrity, and he continued the proud tradition of Labour in Wicklow. His son Conal followed in his stead, serving as a Councillor from 2004 until 2014, and we were all shocked when he died suddenly in 2017. His niece Breeda Bonner also served as a Councillor in Clondalkin from 2011 to 2019.

“On behalf of the Labour Party I want to extend our deepest sympathies to his wife Margaret, daughter Rosemary, grandchildren Áine and Rían, brother Jimmy and sister Therese, the extended Kavanagh family, friends, supporters and the community he served so diligently.”