Drive in Movies at the Beehive this Saturday 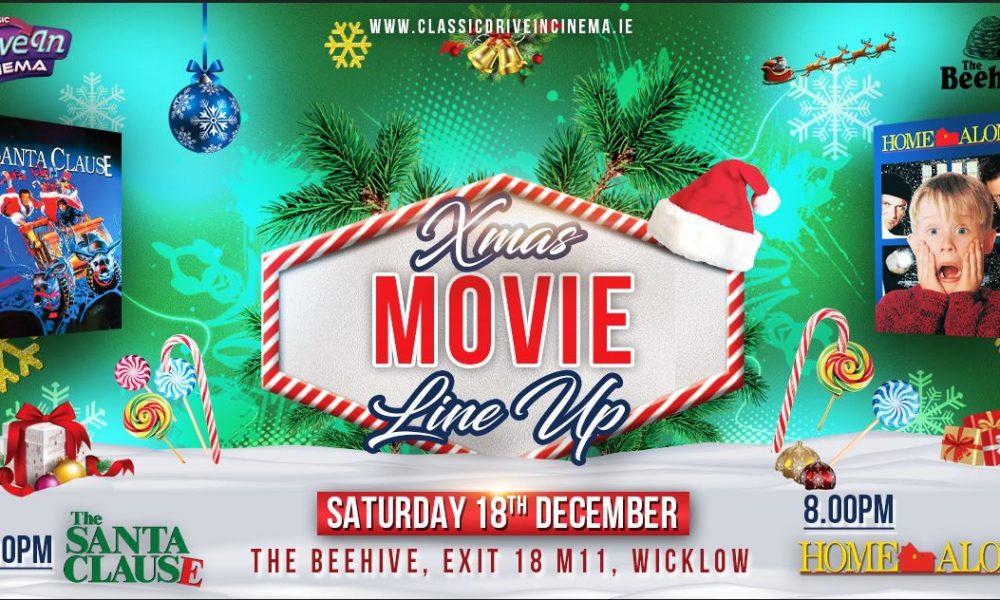 For one night only, Classic Drive in Cinema presents an intimate drive-in screening of the The Santa Clause at 5.00pm & Home alone at 8.00pm at the newly refurbished Beehive Pub off Exit 18 M11, Rathnew, Co Wicklow on Saturday December 18th.

Join us and experience the magic off Christmas at the Beehive and enjoy the biggest Christmas movies off all time.

We have some very exciting food options available including our famous cinema popcorn along with a food market which consists of the Fish Shack and Bak’d Pizza. Tickets from €27.50 are on sale now.

Tim Allen makes an impressive screen debut in Disney’s well-written seasonal film The Santa Clause.
Divorced toy company executive Scott Calvin is pleased to have his son Charlie for Christmas, though the boy himself isn’t happy about it. But when Santa Claus accidentally topples off the roof of the house and falls with a thud in the snow, Scott finds himself taking the merry old elf’s place and earning new respect in his son’s eyes.

When the night ends, the reindeer take them to the North Pole, and Scott discovers that by donning the fabled red suit, he’s inadvertently agreed to become the next Santa Claus. The next morning he wakes up in his own bed and thinks it’s all a dream–but Charlie remembers it with crystal clarity.

Family comedy starring Macaulay Culkin as ten-year-old Kevin McCallister who is inadvertently left home alone by his family when they go on vacation. On the evening before his family leave for their Christmas break to Paris, Kevin is banished to his room for misbehaving by his mother Kate (Catherine O’Hara).

When he wakes the following morning he discovers he is alone in an empty house. Kevin must cope not only with life on his own but also with the threat of two persistent, albeit incompetent, burglars Marv (Daniel Stern) and Harry (Joe Pesci). Meanwhile, Kate vainly tries to find a way to get back home.