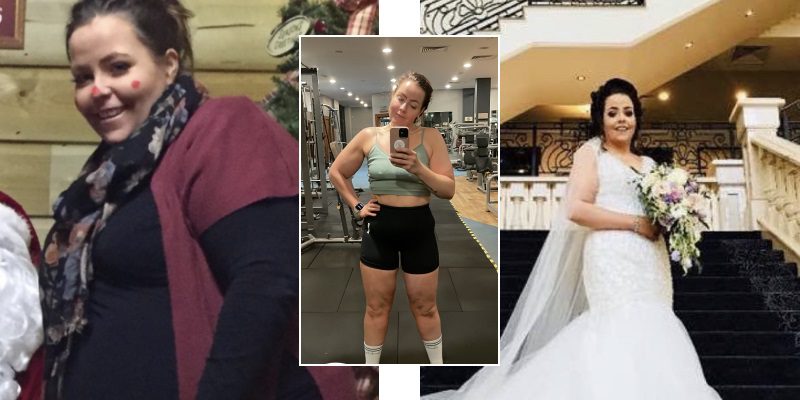 A Co Wicklow woman who lost an incredible six stone is now a personal trainer helping others with their weight loss and fitness journeys.

Stephanie Porter-Murphy, who is originally from Laragh but now living in Dublin with her husband and two children said she had previously battled with her weight since her early teens.

“I was at a concert and I fell and broke my hip and I was on crutches for a year and that’s when I gained the majority of my weight,” Stephanie said. “As a child I was into sport, I used to play football and I was always active so when I had the injury it limited me.”

Stephanie said during her school years she was always “the big friend” and her activity was further limited when she went to college as she needed a hip replacement.

“I tried everything to lose weight, I went to slimming clubs, I tried weight loss pills, shakes – you name it I done it,” she revealed.

Mrs Porter-Murphy said when she had reached her mid-20s she purchased her house and said she had had enough and wanted to change so she joined Slimming World – something only her mother knew about.

“Within two years I had lost four stone and I think I had felt the best I’ve ever felt,” said Stephanie.

When she first met her husband and they started dating, Mrs Porter-Murphy said the weight slowly crept back on and she fell pregnant with her first child, but continued to attend Slimming World to maintain a healthy weight.

On her second pregnancy, Stephanie said: “Slimming World just went out the window and I had gained five-and-a-half stone and I was probably the biggest I have ever been, I think I was over 17 stone at my heaviest.”

After getting engaged, Stephanie said she wasn’t going to look back at her wedding photos like she did with her 21st birthday, her debs and “hate the way she looked”.

Just four weeks after giving birth to her son, she joined Slimming World for the second time. 15 months later and on the week of her wedding, Stephanie had lost six stone.

“I struggled to do everyday things because my hip was getting worse and because I was overweight getting off the ground was hard and walking up the stairs I was out of breath,” she said.

For the last four months of her weight loss journey, Stephanie got a personal trainer and that’s how she “fell in love with fitness” and how it made her feel leaving the gym.

In 2018 Slimming World asked Mrs Porter-Murphy to be a Consultant and she “jumped at the shot” because she was able to help others. It turned out to be a busy year as Stephanie underwent hip replacement surgery that August.

As Stephanie got more interested in fitness and nutrition she obtained a qualification in Personal Training with Setanta College last year and set up ‘Steph Murphy Coaching’.

Stephanie said the “quick fix” diets don’t work but people will initially notice a difference as people will be restricted from eating, drinking and having shakes instead of meals, but once they incorporate ‘normal’ everyday foods back into their diets, people will gain the weight back, if not more.

“If you have to cut a certain food group out of your diet in order to lose weight, it’s not sustainable long-term,” she said.

Mrs Porter-Murphy said anyone looking to get healthier or to lose weight should first of all “realise you don’t have to cut out stuff to see results”.

“If you associate labels or that you can’t eat a certain food group you’re automatically setting yourself up for the mentally of ‘this is a diet and not a lifestyle’ whereas if you start learning about food and that you can have a balanced diet that doesn’t have to cut anything out, just eat in moderation, you will get results,” she continued.

Stephanie said she wants to prove to people she now works with that if they have failed in the past with weight loss, it doesn’t mean they can’t succeed now.

“Some ladies have told themselves that they can’t do it because they may have failed at something in the past and it’s because what they have been doing isn’t suited for them or it’s too restrictive or doesn’t fit in with their lifestyle.”

Stephanie said her clients all have individual plans that are suited around their life and schedule and more importantly, what works for them, as she says “no two clients are the same”.

“I love seeing people obviously physically change, but I love seeing the mental change,” she said. “Seeing people that joined me who have no self-confidence or belief and then realise after six weeks that they can do it – and have, that’s the bit I love.”

When asked what she thinks when she looks back on her old self, Mrs Porter-Murphy said: “I feel proud. I never look back and think ‘oh my god, cringe’ because that person made me who I am today.”