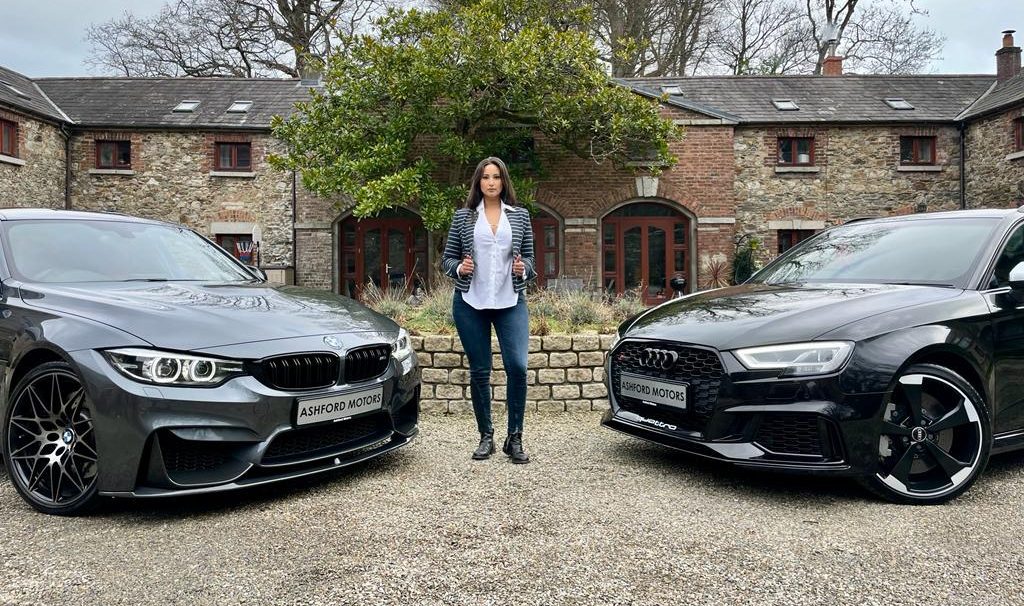 It’s no secret the motor trade is an industry that remains predominantly ruled by men – but one woman is determined that changes and is ripping up the rulebook – and all from Co Wicklow.

Ashford Motors was established just before the pandemic hit as Nadia Adan gave up her comfortable job in finance to pursue her dream and love for cars.

“We changed the model of selling cars,” she says. “When the pandemic happened, we couldn’t have people coming to see cars so I turned to Instagram and doing car reviews.”

“We go on location for these reviews and we sort of do Top Gear-esque but it is of stock that I’m currently selling. This means a potential customer will see this and picture themselves in the car.”

Nadia has pivoted with social media as she reveals she sold a Bentley for sixty grand on Instagram and has sold other cars on the platform too, bypassing the traditional car dealing sites such as DoneDeal and CarZone.

The reviews of the cars are nothing short of a cinematic experience, as while Nadia informs her audience and potential customers about the spec of the vehicle, we’re treated to enthralling views of both the car and the Garden County.

“It’s something no garage in Ireland has ever done, and I’m starting to see other garages try and copy this and that’s great to see, we’re changing the game completely,” she says.

Nadia continues: “I’m disrupting the motor industry in Ireland, I’m hearing it from everywhere. It’s a woman doing it, it’s online and times have changed and we all have to get with it.”

Ms Adan is keen to support local businesses in the production of her video reviews of the cars and showcases as much of Co Wicklow as possible.

Her business is best described as boutique, which runs on an appointment-only basis selling high-end luxury cars to the day-to-day run arounds.

The 31-year-old’s determination and drive is perhaps a trait inherited from her mother, who has had a number of her own businesses.

Originally from Somalia, Nadia and her mother were forced to flee when a war broke out in 1993. After travelling to various countries and being displaced, they both arrived in Ireland in the late 90s and have called Ireland home ever since.

“When we lost everything, my mother’s first thought was ‘I need to get my daughter to somewhere where she can get an education’ and that is the one word I’ve heard my whole life from her; education.”

Nadia says she is a “third-cultured kid”, which is a person who was raised in a culture other than their parents’ or the culture of their country of nationality, and also live in a different environment during a significant part of their child development years.

“I’m Irish though, through and through,” she says.

Nadia says she always loved cars, and her former job in finance meant she was big into her luxury cars.

“I remember selling one of my cars, on one of the classified websites, and I actually made money on it,” she recalls.

Before launching Ashford Motors, Ms Adan went and bought cars privately before selling them on.

“I’m no mechanic but I know cars and I know it’s a product and it’s about how they look, the brand and the quality of the car.

“When my job didn’t work out before the pandemic, I said to myself I’m going to give this a go,” she explains.

When Nadia originally registered as a car dealer, she didn’t have a premises and operated solely from her house while beginning to build up contacts in the motor industry.

Her first premises was in Rathnew, before moving to Ashford.

Ashford Motor’s businesses model has proven to be a success, as Nadia reveals the businesses turnover last year was over €1 million.

Nadia aspires for her business to be the best intimate and boutique-style car dealership in the county.

“I want to be the premier Garden Dealership of Wicklow where we have affordable cars but luxurious and performance cars,” she says.

While Nadia is taking on the motor industry, being a female of mixed-race heritage she says she has been put down by men in the trade but on the whole her colleagues are supportive.

“That just makes me feel that I am a threat to them and I’m doing things right,” she says. “The quality of my cars and the reviews from customers speak for themselves.”

Nadia says she has become a trusted female figure for other women who are buying cars and listens to what matters to them and what their needs and wants are.

“I don’t make them feel inferior and I don’t try sell them gimmicks,” she explains, adding: “Knowing my customer is important and whether you’re getting a €10,000 car or a €100,000 you get the same treatment.”

“People buy from people” and empathy is important she adds. Testament to Ashford Motor’s quality, Nadia says they’ve never had a car returned.

With Ashford Motors, Nadia says she wants to show other women that if they want to work in the motor industry they can – and that doesn’t mean they have to “get oil under their nails”.

“A car is the second biggest purchase a person will make, with a house being the first, so it is a big deal.”