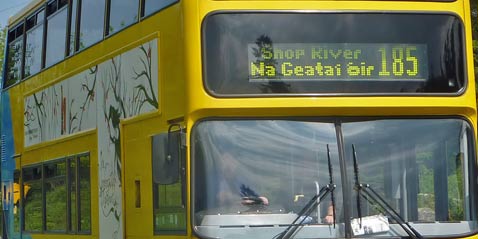 Wicklow Sinn Féin TD, John Brady has voiced his welcome to reports to the confirmation from the National Transport Authority that a series of new local bus routes to be introduced in the county through BusConnects are scheduled to be up and running by the middle of 2023. While the new services were previously announced, this confirmation of a time frame is to be welcomed.

“I want to welcome this confirmation that the new routes announced in Wicklow through BusConnects, these routes when operational next year will provide a much-needed service to local communities.

“When operational the new services in Wicklow will include a new bus route around Bray taking in the Full Southern Cross Road, Putland Road, Meath Road, Strand Road, DART Station and out to Palermo, it will be called the L14. This is something that I have long campaigned for and had included in my submission as part of the BusConnects consultation process.

In 2017 myself and my colleague Muireann Dalton launched a petition calling for the creation of a new bus loop service to link Newtownmountkennedy to Kilcoole and Greystones. This proposal was taken onboard by BusConnects and new routes called L1 and L2 have been developed. This new route loop Bus services will link Greystones, Newcastle, Kilcoole, Newtownmountkennedy. The morning peak services similar to 84x will continue, they will be called X1 and X2

It is really disappointing however in the changes to the bus services in the area that the poor decision to withdraw the service from Fassaroe wasn’t reversed. This is something that I will continue to push for.

There will be a new feeder bus from the current Ballywaltrim/Southern Cross Terminus to Bray DART. It will be called L12.

I would also like to stress though that there is an accompanying onus on planners to ensure that there is adequate public consultation with local communities. I am aware that there are some concerns surrounding the possibility that parking spaces may be lost in parts of Bray, where motorists currently struggle to find suitable parking outside their homes.

We also need to see progress on the delivery of badly Park and Ride services in Wicklow, I will continue to engage with the NTA in relation to these.

The new BusConnects routes will be a welcome addition to the provision of public transport in Wicklow but it must be developed in conjunction with a comprehensive transport plan for the county that will include the expanded and improved rail services alongside upgrades to the N11 / M11 and N81.”