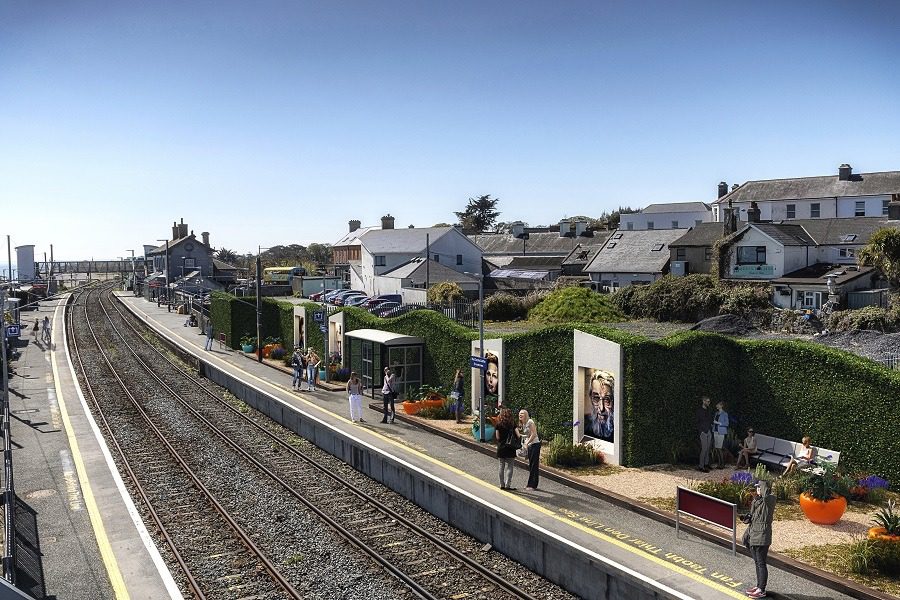 Led by Greystones Town Team, and with the support of CIE, Irish Rail, Greystones Tidy Towns and the Whale Theatre, this ambitious project aims to transform the aesthetic of the railway station offering an inspiring, warm welcome to visitors as they arrive into the station.

Greystones Railway Station is located on Church Road and was opened in the autumn of 1856. The architect was George Wilkinson, who also designed the Railway Stations at Dalkey, Harcourt Street and Wicklow. One of the events of note that occurred at the station was the arrest of Eamon de Valera in May 1918 when he was stepping off the train onto the station platform.

Over the years Greystones Railway Station has received excellent standard maintenance from Irish Rail. This has been mainly of a technical, safety and public facility nature. However, the public realm of the station has considerably deteriorated with regard to its general appearance, particularly within the confines and along both platforms. In terms of visitors arriving by train, this may be their first impression of Greystones.

The current promoters together with Greystones Town Team are now determined to deliver on what was
initially identified and proposed some years ago by the very active Tidy Towns and Greystones 2020 as they do not believe that it creates a sufficiently positive or accurate image of the town, its history, legacy, vibrancy or community.

The project involves a complete makeover of the station, with the integration of stunning visual elements
telling the story of the town. At the centre of this project will be the construction of up to nine Corten Steel Totems, each of which will feature artistic portraits of key figures who have connections to Greystones in a variety of ways.

These portraits have been created by Greystones-based artist Tom Byrne, and the collection includes well-known figures such as Ronnie Drew, Samuel Beckett and Michael Collins as well as lesser-known individuals such as Averil Deverell (one of Ireland’s first female barristers), Geraldine FitzGerald (Irish actor born in Greystones) and A. J. Potter (prolific classical composer and radio broadcaster). The portraits
themselves have been photographed by Gillian Buckley, and these images will be embedded into the 3m x1.4m steel totems, with the precision craftsmanship and skill of Billy Griffin. A sample size Totem silhouette will be on show at the station.

Another local artist, Mary Kate Hardy has also been commissioned to paint an amazing 45-foot wall mural
along the station’s eastern platform, with images depicting nostalgic and original scenes inspired by Greystones and the surrounding landscapes. In addition, waves of Portuguese Laurel hedging (Prunus Lusitanica) will adorn the platforms and colourful illuminated scoop planters will add an extra splash of colour and fun to the station.

The work has already begun. The team of professionals, volunteers, and Irish Rail digging and clearing on the East platform. Irish Rail have repainted the station inside and out and repairing walls and boundaries.

Chairman of Greystones Town Team, Mr Dermod Dwyer said: “This exciting project is designed, approved and about to be delivered. Now to literally keep this makeover train moving we need you. This is our Town, your legacy, please step up and help fund this citizen project.”