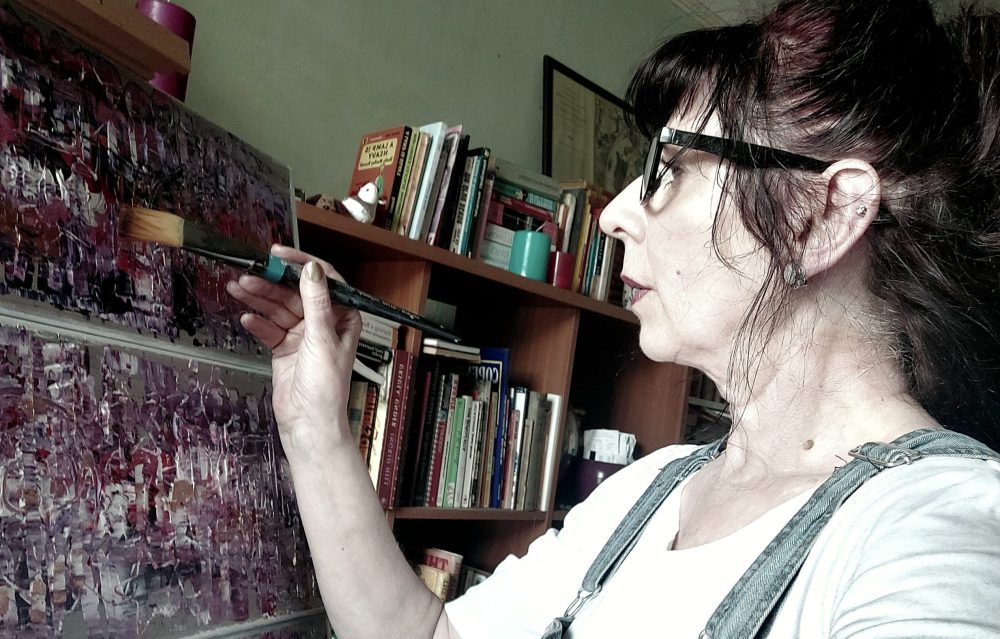 Kathrina Shine is an Irish artist and native of Co Wicklow whose work can be found in the OPW national collection and private collections around the world.

A storyteller and proponent of the impasto technique of painting, Kathrina creates vibrant narratives with knives, inks, strokes, semi-collages, and sometimes a liberal application of paint.

Speaking about her career over the last number of decades, Ms Shine said: “I started off as an architectural technician, then I moved into the theatre.

“I spent 10 years working in theatre in Britain. And then I came back to Ireland, and I’ve worked the last 12 years in the film industry.

“And behind it all I’ve been painting for the last 24 years.”

Because of her broad range of skills and work in various areas of art, Kathrina says the Arts Council have told her she should be referred to as a ‘Multidisciplinary Artist’.

For Kathrina, it wasn’t the case of her just deciding to be an artist as she tells WicklowNews.Net that she was “born this way”.

Ms Shine has a gallery at her home, which is located at number five Main Street, Wicklow Town – the idea beyond the name ‘Gallery@No.5’.

Speaking about setting it up, she said: “I painted my front door lime green, and I painted the hallway and put up LED lights and so there’s a gallery now with paintings.”

While Kathrina has had locals visit her gallery, she revealed she also has visitors from around Ireland and further afield – including Ukrainians and French people.

“I’m an abstract artists deliberately so that’s the sort of concepts I do, rather than actually putting realism down, I can do that,” she said. “The people that are connecting with them understand, there’s a story behind every one of my paintings.”

Kathrina is apart of Network Ireland, Network Ireland is a non-profit, voluntary organisation, with over 1,000 members and 14 dynamic branches nationwide including in Wicklow.

Speaking about the network, she said: “I didn’t even realise this had been going as long as it was going – and that was that there was a local branch.

“Then I contacted them and went to the first coffee morning and just liked the people that I met.

“It kind of went from there and I think this is my fourth year as a member, and membership is growing.

“There’s lots of a very eclectic people and they’ve been very supportive of me, I think everybody’s trying to support each other because we all need support.”

::For more information about Kathrina Shine and her work, click here